N/a
Alien Shadow (シャドー星人 Shadō Seijin) is an alien race that first appeared in the TV series Ultraseven, episode 23 "Search for Tomorrow". Although notorious for being aggressive invaders, they do not shy from using cowardly tactics as means of surprising their opponent.

The Alien Shadow are invaders who plan to destroy the assets of TDF. When fortuneteller Yasui had predicted their plans ahead, they decided to hunt him for good. When chasing him with a truck, the Ultra Guard managed to save him but kicked him out later on as they fail to trust his predictions (the destruction of TDF Warehouse 03 and the landing of their spaceship in Mt. Fuji). After being sent out, the Shadows target him again and managed to capture him with their own truck. Moments later, they launched an attack on the Warehouse 03, injuring UG member Kaoru Kiriyama.

After restraining Yasui, the Shadows try to have him sent phony predictions to the TDF but seeing how he was able to predict their next plan, he was tortured again. Ultra Guard members storm their base and the Shadows escaped with Yasui through their saucer. With Ultraseven snaps the saucer and decapitated Gabura, Alien Shadow surrendered Yasui back but manipulated the severed head of Gabura to attack Seven again until said fortuneteller exposed their ship, as Seven destroyed it and put an end to both alien and monster.

The Alien Shadow are still aggressive invaders whose motive stems from the need to survive. To that end, certain operatives who specializes in espionage missions put their efforts into a hard training of mimicking emotions so as to deceive their targets. They also put their research into creating Zegun and the device that store said monsters. Young soldiers of Alien Shadows operate under a military detachment named the Gabra Cano (ガブラ・カーノ Gabura Kāno lit. "Child of Battle"), led by Drillmaster Zenna (ゼナ, Zenna) who trained them with an iron fist.

During the Omega Armageddon, Planet Shadow was devastated and multiple untold casualties took place during the war, with numerous Alien Shadows travelling throughout the universe to search for new planets to claim as a second home for their kind. Following the events of Crisis Impact, Zenna journeyed to Earth and joined AIB under the pretence to restore his homeworld's glory, but joined the organisation in earnest after witnessing the deaths of numerous students under his care, and resolved to seal the Zegun Retriever Device so that the monster could not be used. His former student Kuruto (クルト, Kuruto) was enraged by his superior's apparent defection, and infiltrated AIB to gain access to Zegun, and eventually launched an attack on Earth using the living weapon.

Although the others attempted to have him listen to reason and understand that the people of Planet Shadow could co-exist with humanity, Kuruto believed that he was beyond redemption, and merged with Zegun for the last time, destroying himself and the monster through the use of Zegun's own Zegunt Beam. Kuruto's accomplices (also Alien Shadows) were apprehended by Zenna and sent by the AIB to be deported from Earth. 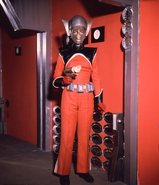 Alien Shadow's mask in the opening of Kaiki Daisakusen episode 11