Alien Serpent (サーペント星人 Sāpento Seijin) is an alien that appeared in the TV series, Ultraman Mebius. He appeared in episode 39.

Alien Serpents were aliens whom had come to Earth under orders of Alien Empera to destroy GUYS. Taking the body of GUYS lunch lady, Hinode Sayuri (who was hit by a car while saving the life of a child), Alien Serpent used her body in order to retrieve a portal device from her home planet to facilitate their assault on Earth. Once Hinode found out about their plan, Alien Serpent took total control of her body and managed to shut down the power to the GUYS base power plant. He then used the portal device to bring several more of his kind to Earth in order to help him in their plan to conquer Earth. Suddenly, Hinode's memories returned to her and her consciousness swiftly overpowered Alien Serpent's control, allowing Hinode to take out most of Alien Serpent's fleet with ease. Once GUYS was able to enter the fray to assist her, the remaining Serpent aliens transformed their bodies into liquid and merged to form their larger form outside of the GUYS HQ.

Now that their problem was much larger, Mirai transformed into Ultraman Mebius in order to face the giant alien. The battle quickly went in favor of the giant Alien Serpent due to its newly crafted armor, which gave him protection from Mebius's Mebium Blade. After Hinode revealed Alien Serpent's weakness to salt, GUYS used a fire extinguishing missile to completely dry out Alien Serpent's body until it was transformed into a rusty statue. Mebius then took the opportunity to destroy the statue with the Mebium Blade, ending Alien Serpent's threat. Afterwards, Hinode resumed her lifestyle as a mother, but in a comedic twist, she was now enhanced with Serpent's leftover powers.

An Alien Serpent was seen, along with a Rekyum Man, guarding the captured Daichi Ozora. During a discussion between the two about ice cream, Juggler came into the room and swiftly defeated the two.

An Alien Serpent reappears in this series as an AIB agent. He, along with his colleagues watched the activities of Kei Fukuide from the AIB base. When Kei discovered them observing him, he destroyed the field agent's disguising device and compromised the mission, leading to the control panel where the alien stood to malfunction.

One individual was among Volk's gang, and knocked out Hiroyuki Kudo and Homare Souya before capturing them. Homare managed to break free of his chains and beat the other henchmen in hand-to-hand combat. Requiem of the Wolves

Another Alien Serpent was interrogated in the streets by Hiroyuki, who went out alone wanting to find out Kirisaki location since he had landed Homare in the hospital. After roughing up the alien, who had no information to spare, Hiroyuki threw him aside and told him to get lost. Withstand the Lightning Strike!

Being slug-like in nature, exposure to salt is fatal to Alien Serpents and will petrify them. Also, Alien Serpents must constantly consume water in order to survive. Also, if the person they possessed was able to regain his/her control, Alien Serpent would die and his power will passed to them for a few days.

Energy Blast
Add a photo to this gallery
Larger Form

Being slug-like in nature, exposure to salt is fatal to Alien Serpents and will petrify them. Also, Alien Serpents must constantly consume water in order to survive.

An Alien Serpent is among one of the students that go to Beyond High School, along with Riku, Pega, Alien Groza, Cicada Man, Cicada Woman, and Alien Mefilas. 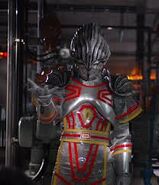 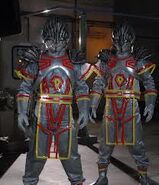 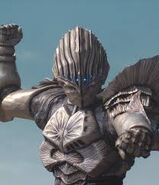 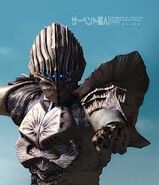 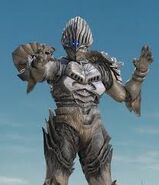 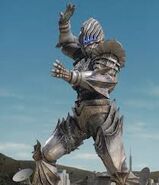 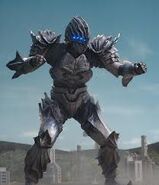 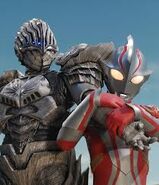 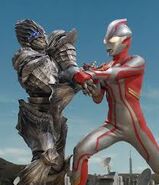 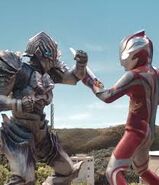 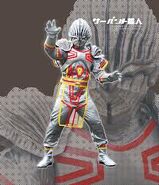 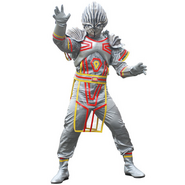 Add a photo to this gallery
Retrieved from "https://ultra.fandom.com/wiki/Alien_Serpent?oldid=436974"
Community content is available under CC-BY-SA unless otherwise noted.