Ultraseven episode 46 "The Showdown of Dan vs Seven"

Rumor has it that the people of the planet Salome have the highest I.Q. out of any other alien race. In order to prove their intelligence, the Salome planned to invade the Earth. However, an Ultra Warrior by the name of Seven was the Earth's vanguard. First, they captured Dan to show him their Imitation Ultraseven. They also captured Dan so he wouldn't transform into Ultraseven. Then, "Ultraseven" would attack the Ultra Guard. Before the Salome could start their attack, they asked for the formula to make an Emerium Ray for their Imitation Ultraseven. They decided to torture Dan until he finally gave in to their demands. In order to prevent the Ultra Guard from discovering their base, they set a time bomb for the base to blow up with Dan in it! Dan tried to grab a lighter with a string. After a while, Dan was free and swam to shore where the robot Ultraseven was already attacking. Then, Dan realized that his Ultra Eye was missing. In order to distract the robot, Dan released Agira, a capsule monster. As Agira battled hard against the robotic imposter, the Alien Salomes were watching the fight from their flying boat. As Agira proved to be no match for the robot, the Ultra Guard attacked the Salome's boat. The flying boat went underwater while Imitation Ultraseven shot the Ultra Guard's plane. As all hope seems lost, Dan becomes Ultraseven! It was a battle between red giants! The Salomes were anxious now that the real Ultraseven was back in action. As the Salomes were confident that their robot was going to win, both Ultras threw their Eye Sluggers! They were both of even power! They both did a jump kick and both were still standing and were even in an energy lock. Imitation Ultraseven was knocked down while Ultraseven flew high in order to get the upper hand, Imitation Ultraseven followed behind. As the two flew high in Earth's atmosphere, Ultraseven turned and the two collided until both were still flying. Ultraseven started spinning at high velocities smashing into Imitation Ultraseven again, destroying it, but the impact caused Ultraseven to fall into the ocean. Ultraseven rose from the water and the Salomes thought it was their robot until, Ultraseven destroyed the Salome's ship. The Showdown of Dan vs Seven

Alien Salomes, like all the preceding aliens, are an alien race who are ran by a scientific community. A small group of them built a base on Planet Cheney, formerly known as the Planet of Learning, and began experiments into a forbidden power dimensional energy. With this discovery they built robotic Imitation Ultra Brothers (SR Team) to use as tools of invasion across universes. Eventually they found Darklops Zero floating in space and installed his Dimension Core, they continued research and soon discovered how to travel between universes. Their leader, Dr. Herodia, desired to use these horrors of technology for omni-universal domination. Unknown to them at a time, their experiments had made their solar system an pocket universe that connected to others, a singularity that threatened to collapse all other universes into itself. Some time passed and alternate versions of ZAP SPACY (in their universe Rei never fully freed himself from the Rayblood nature) were pulled into the dimensional rift by a wormhole created by the Salomes. After they realized where they were, the ZAP SPACY crew tried to stop the Salomes in their tracks, but Dr. Herodia sent out a wave of robot Imitation Ultra Brothers to eliminate them. It is unknown when but around this point Ultraman Zero joined the fight, possibly being pulled into the dimensional rift by another worm hole. The Imitation Ultraseven started to fight the ZAP crew while Zero would battle the remaining four robots. After Imitation Ultraseven defeated the ZAP crew, their Rei went off trying to destroy the Salome's base on his own, but he lost to the technology of the Salomes and lost his Battlenizer to Dr. Herodia. Herodia then ordered for the creation of Mecha Gomora based on the alternate Rei's Gomora's stats, it would be assumed that this alternate Gomora is killed while being studied. Two weeks later the World of the Land of Light versions of Capt. Hyuga and Rei were sucked into another wormhole and were soon chased by the Mecha Gomora. They were saved by the alternate Capt. Hyuga who explains the Salomes' plans before disappearing as a side-effect of the system unique nature, anything that was on world when the experiments started would be treated as alien bodies by the pocket universe and be expelled from existence.

Dr. Herodia would then continue to watch with amusement the battle between Ultraman Zero and Mecha Gomara but eventually she ordered the Darklops Zero to be released on Zero. She and the rest of the Salomes would then watch in disbelief as Darklops Zero destroys the Techno Gear that was placed on him to keep him under control and then continue it battle with Zero. Eventually Zero was over powered and Herodia gloated that she controlled a power greater than Ultraman Zero. Eventually the surviving Imitation Ultra Brothers (the Imitation Ultraman Jack and Zoffy were destroyed by Zero offscreen) arrived and battled Zero while Darklops Zero watch from above, charging his Dimension Core sent Zero and the Imitation Ultra Warriors into a wormhole to the space between dimensions. The Salomes then retrieved an unconscious Rei (who had been knocked out while battling Mecha Gamora) and Darklops Zero.

Soon after Rei was rescued by the alternate Rei who had transformed onto Reimon (Burst Mode) due to sensing another Reionics (Rei), they both then proceed into the hanger were an army of Imitation Ultra Brothers were being kept and were soon captured once again by Dr. Herodia and her minions. Herodia then explains she intends to send the Ultra Robots into other dimensions to conquer in the name of Salome. But Capt. Hyuga then arrived with Rei's Battlenizer, Rei then released Gomora once again to destroy the Ultra Robots but Mecha Gomora was released again to face Gomora forcing their fight out side, but Darklops Zero suddenly woke up from his stand by mode and grabbed Dr. Herodia as Salome's base was crumbling, stepping on her minions, Herodia held on to his pinkie finger as he began to mock and belittle her for trying to control him. Defeated and humiliated by Darklops Zero's mockery, Dr. Herodia let go of her grip and is mortally wounded by the fall before she is saved from the burning building by Hyuga. She dies in his arms but not before telling him that Darklops Zero was not their robot and that was created by someone else. Ultra Galaxy Legend Gaiden: Ultraman Zero vs. Darklops Zero 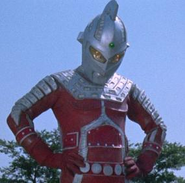