None
Alien Rivers (リヴァーズ星人 Rivāzu Seijin) is an alien that first appeared in Ultraman Taiga episode 1 "Buddy Go!." One individual appeared, named Kawazu (河津, Kawazu). They have the appearance of a human, but it is unknown whether it is their original appearance or mimicry.

Kawazu was a biologist who specialized in protecting endangered Kaiju across space-time. He requested EGIS to protect and escort Baby Zandrias, who was targeted to lure out Young Mother Zandrias, who was then to be used as a tool to demonstrate of Zegun's power during the Villain Guild's Monster Auction. Alien Magma temporarily robbed Baby Zandrias from him, but in the end, once both mother and child were safe thanks to the help of Hiroyuki Kudo and Taiga, Kawazu left the Earth via spaceship, taking both Zandrias into space with a tractor beam. Buddy Go! 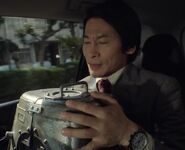