Ultraman Tiga episode 7 "The Man Who Came Down to Earth"

Alien Reguran has a motif based on salmon fillets.

Alien Reguran was known for his wickedness and treachery. One day, he approached the Bemudar Space Station. After the father of the GUTS member Rena sent five warnings, Reguran was prepared to use his laser blasters. However, the blasters had trouble, so before TPC was forced to destroy his spaceship, he himself left the spaceship in an escape pod while his child and wife died. After TPC called Rena's father and his co-worker back to Earth, Reguran attacked them and crashed their rocket. Rena left for the site before the rest of GUTS left as well. After landing, Reguran killed the co-worker and captured Rena's father. Then, as GUTS arrived, Daigo found Rena, but the two were discovered by the alien, who then captured Rena and began to torture her with electricity on the cross. Rena's father then tried everything to rescue her, but couldn't due to a force field. He then revealed Reguran's treachery. Reguran was just about to kill the father and daughter when GUTS arrived.

Reguran then teleported out of his pod, which was set on self destruct, and enlarged himself. GUTS came outside and Daigo transformed into Ultraman Tiga. After a short battle, Reguran clearly couldn't defeat Tiga. He then took off for the sky but was caught up by Tiga in Sky Type. The two raged and Reguran fell to the ground once again. There, he tried to attack Tiga with a windmill but failed. He then pretended to surrender, but ambushed our hero and tried to choke him to death. As Tiga's Color Timer began to blink, Rena and her father in the GUTS Wing 1 attacked the alien. The hero and alien then engaged in a beam battle of Fire Stream vs. Ranbalt Light Bullet, Reguran was quickly overpowered and then destroyed by the light bullet. The Man Who Came Down to Earth

Captain Zoyaka was the self-declared "worst person in the universe." He first appeared on the Super GUTS main screen, proclaiming his attack plans on Earth. However, the Super GUTS deployed four GUTS Eagle Gammas, two GUTS Wing 2s, and a whole squadron of GUTS Wing Crimson Dragons to combat the threat. The threat was repelled, then Captain Zoyaka declared another attack using the Comet Bomb, sending tons of comets to Mars. Asuka and Mai were there to pick up a new weapon: the Spacium Gun, and a new weapon was deployed: Mountain Gulliver 5. However, even after that, it was still not enough to stop the comets. The Artdessei, a squadron of GUTS Wing 1s, Mountain Gulliver 5, and Asuka in the GUTS Eagle Alpha all tried, but still could not save Mars. Captain Zoyaka (and two others) then teleported Asuka away to torture him with punches and kicks, but Asuka transformed into Ultraman Dyna and used the Solgent Beam on the comets and helping Reguran pods. Captain Zoyaka was presumed to be killed in the wreckage. Ephemeral Dream

Alien Reguran reappeared in episode 1 of the miniseries, Mirror Fight 2012.

Alien Reguran has been released two times as part of the Ultra Monster Series. The first edition (1996) was released in conjunction with the broadcasting of his episode. It is made of dark grey vinyl with dark purple in the other parts. The figure itself had a very glossy finish. The other is the 2000 ver., which features a lighter tone of colors as well as glittering silver instead of grey. Captain Zoyaka only had one figure release in the 1997 ver. in conjunction with the broadcasting of his episode as well as Mountain Gulliver 5. The figure is made of red vinyl with silver and another layer of spray painted silver. Alien Reguran was number 89 in the 1996 ver. and 50 in the 2000 ver. Captain Zoyaka was number 89 EX. 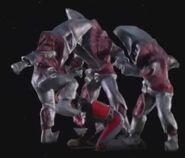 Alien Reguran in a Stage Show
Community content is available under CC-BY-SA unless otherwise noted.
Advertisement