"I am Rayblood. I rule the entire universe. I shall give you the power you seek."

Unknown
Alien Rayblood[2] (レイブラッド星人 Reiburaddo Seijin) is an alien that appeared in Ultra Galaxy Mega Monster Battle. He appeared in episode 12 of that series and the main antagonist, responsible for creating the Reionics (レイオニクス Reionikusu). Alien Rayblood is perhaps an equally powerful alien to Alien Empera, if not stronger.

Although not physically seen with a prominent role, Rayblood's first mention and appearance was seen in the second-to-last episode of the original Ultra Galaxy series. He is stated by Kate to be the creator of all Reionics across the universe which he ruled for millions of year. Even the Yapool and Alien Hipporit were fearful of him.

Some thousands of years ago, Rayblood's body was destroyed, but his genes spread across the universe, creating the Raybloods and Reionics in hopes of determining who would be his successor by making them battle one another to the death.

It was stated by Kate in the following series, that it was Rayblood, who, as just a spirit, turned Ultraman to stone and imprisoned him on Planet Boris.

It is revealed in the sequel series to the original Ultra Galaxy that Alien Rayblood was still alive in a sense, his spirit having been sealed deep within Planet Hammer for ancient unspeakable crimes. During the Reionics Battle, upon regaining enough power, Rayblood called out to Reimon, to approach him. Upon entering the depths of the planet, Rei was confronted by Armored Mefilas, whom Rayblood had brought forth to test Rei's strength. Impressed by Rei's abilities after Mefilas was defeated, Rayblood finally revealed himself to Rei in hopes of persuading his Rayblood offspring to become his successor. Rei however refused and Rayblood chose to deal with Rei personally, possessing a newly revived Armored Darkness and commanding him to attack Rei. Despite easily pummeling Rei's Gomora as Armored Darkness, Grande and Red King appeared as well, having followed Rei and ultimately Alien Rayblood is destroyed by the combined efforts of EX Gomora and EX Red King.

Rayblood's soul however wasn’t finished yet. As the ZAP SPACY was escaping Planet Hammer as it was imploding, Alien Rayblood spirit emerged from the black hole that was the planet to attempt to pull them back to their deaths. However the spirit was ultimately stopped by the combined forces of Ultraman and Ultraseven as the two Ultras fired a Spacium Beam and a Wide Shot, destroying the core of Rayblood's spirit.

Rayblood appeared to Ultraman Belial prior to the events in the film. Their encounter was spoke of by Mirai Hibino that after Belial was banished from the Land of Light for tampering with the Plasma Spark, Alien Rayblood appeared before the Ultra and fused with him, transforming him into the powerful, evil Ultra he is now. Mega Monster Battle: Ultra Galaxy Legends The Movie

Rayblood reappeared in this manga series, taking place 50 years after the original series.

Following his destruction by the hands of Ultraman and Seven, Rayblood recreated the Reionics Battle to gather all Reionics in one place. He sent Bullton to Earth, summoning various Kaiju from across the multiverse and sent Pigmon to pick a human Reionics, which succeeded in the form of manga protagonist Io Mikura. As the series passed, Rayblood used the space battleship Prometheus to collect the combat data of Io and his Gomora and took the appearance of Reimon's Burst Mode as a medium, summoning Grand King to fight against Io and a young Alien Keel Reionics named Vittorio. Failing to do so, he summoned Silverbloome and captured every available Reionics to consume their power and partially revive himself.

When Rayblood has fully revived, he revealed Pigmon as his accomplice, shocking Io's party and unveiled the Prometheus' combat form as Deathfacer but before he can decimate the entire team, Pigmon defected him and Io's Bemular shielded them at the last minute. Io summoned his Gomora and Vittorio's EX Gomora to fight against the possessed robot. Despite the possession of Gomora's combat data, Deathfacer fails to calculate EX Gomora and in the end defeated by both monsters when combining their finishers: W Super Oscillatory Wave (Zero Shoot).

The manga itself is also adapted into the game premise of Mega Monster Battle: ULTRA MONSTERS (predecessor of RR) where the player took control of Io himself and their monsters being optional to their choice. Rayblood's scenario was depicted differently in the game, where he summoned a Zetton and a copy of the player's monster choice instead of Grand King and never took the form of Reimon's Burst Mode. As Deathfacer, since Bemular's part was omitted due to the nature of the game, Vittorio blocked the Neo-Maxima Cannon and survived but heavily exhausted, he gave the player his Battle Nizer to perform Double Monsload, therefore defeating Deathfacer.

Due to being a spirit, Rayblood survived his encounter and inhabited a Reionics Kanegon's Battle Nizer while bringing along a DNA sample of Kate's late Zetton. Kanegon shared his Battle Nizer with a young boy named Ai Asama after entering the Earth (which was from Neo Frontier Space World, taking place sometime after Tiga's final battle), where the boy proved to be a better controller of his Red King whereas Kanegon has trouble in doing so. Ai and Red King's combat strength was used by Rayblood to revive himself and finally unveiled himself during the right time, bringing out a cocoon that housed EX Zetton as his new body. Before revealing itself, EX Zetton easily decimated Ultraman Tiga after his battle with a revived Gatanothor, though Ai assured that Tiga is fine. As Rayblood/EX Zetton effortlessly eliminated the Space Alliance Army (a universal alliance consisting of Kaiju and Aliens from the World of the Land of Light), Ai was visited by Kate's spirit, who revealed that Rayblood used her late Zetton and encouraged the boy to defeat him. Ai and Vittorio first attacked Rayblood with their monsters before Io, Ultraman, and Seven joined the fray. Seven used his Ultra Psychokinesis to block EX Zetton's Zetton Shutter for the young Reionics to launch their attacks, defeating Rayblood once more. After the battle, Kanegon, Io and Vittorio acknowledged Ai's potential as a Reionics, therefore allowing the boy to gain his personal Neo Battle Nizer.

Like its previous manga, the entire story is also adapted in its game iteration, Mega Monster Battle: ULTRA MONSTERS, though also had its own differences. While Rayblood follows his original plan of inhabiting Ai/Kanegon's Battle Nizer and reveals himself (while taking over EX Zetton (Kate's Zetton)'s body), he did not face the Space Alliance Army and never attacked Tiga (who disappeared first before Vittorio's rampage). Instead, he directly face the protagonist's (optional) monster and still standing even after one round of battle. Before Rayblood/EX Zetton can fight again, it was then where Reimon and Kate's spirit appeared, claiming her Zetton and thus leaving Rayblood to disappear from vulnerability. Ai's full transition as a Reionics never came into realization and returns to his original world, with Vittorio and Kanegon bidding farewell.

Rayblood's legacy was revived once again by Reibatos, another Reionics that wanted to follow the same path as Belial. His image appeared when Reibatos confirms to Ultraman Zero that he is also a Reionics.

Rayblood was mentioned by Belial when he Fusion Rises into Chimeraberus, who added that the alien's own Reionics power was utilized during the creation of Kaiju Capsules.

In the final confrontation against Ultraman Belial, Riku Asakura received his father's past recollections (including his conversion into a Reionics by Rayblood) and embraced the former in an attempt to understand his pain. This allowed Riku to connect to the Ultra deep within Belial, represented by expulsion of Rayblood from Belial's mental body as it changed back to Early Style. With this Riku gained a deeper understanding of him. Unfortunately Belial wasn't able to comprehend his son's compassion and with the connection broken off, choose to try and eliminate him at that moment before being obliterated.

Reimon is Rei's form when tapped into his Rayblood nature, thus making it as a distant variation of Alien Rayblood. Furthermore in the Ultra Adventure manga, a partially revived Rayblood used Reimon's Burst Mode as a physical projection.

As Reimon he gains great strength, agility, fighting skills, and other powers. Besides his great skills as a fighter, here are some of his super powers: 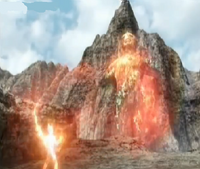 When Reimon feels extreme anger or rage, he transforms into Burst Mode (バーストモード Bāsuto Mōdo), a black/red form, and he has the ability to evolve Gomora into Reionic Burst (レイオニックバースト Reionikku Bāsuto) mode as well. In this form, Reimon becomes extremely powerful but violent in battle, as does Gomora, and will fight both friend and foe alike. He also evolved into this form after being mind controlled by Belial. Later in the series, however, he learns to evolve Gomora into Reionic Burst mode without himself entering Burst mode himself.

Although Rayblood's body was destroyed, his genes were spread across the universe, creating the Raybloods and Reionics in hopes of determining who would be his successor by making them battle one another to the death. 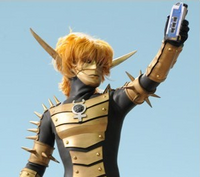 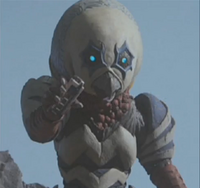 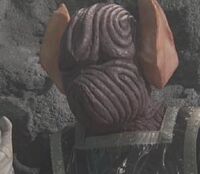 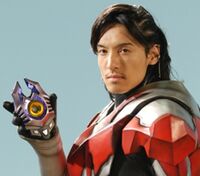 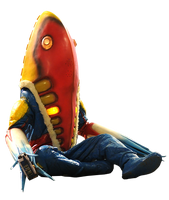 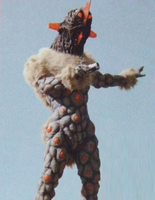 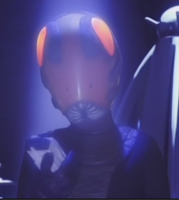 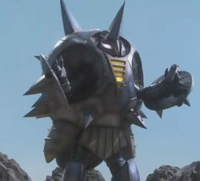 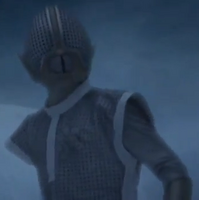 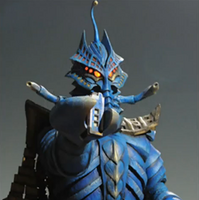 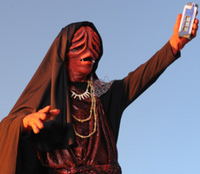 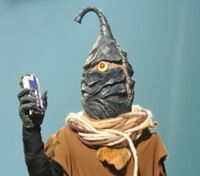 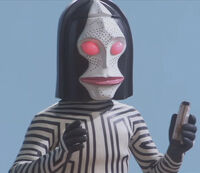 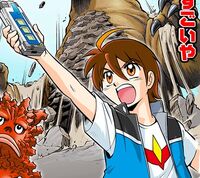 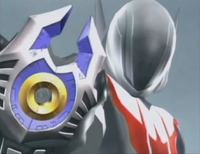 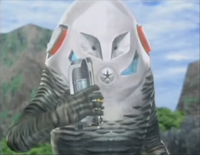 Several of these aliens appeared in Mega Monster Battle: Ultra Adventure manga series as side characters:

These Reionics were only available in the arcade game ULTRA MONSTERS until its final successor, RR. Whereas there are several new Reionics, others were simply reused from the series cannon, though gaining alternative monsters instead.[3][4] 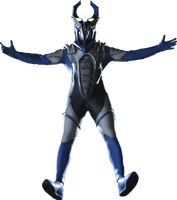 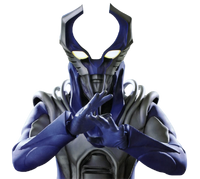