Stage show(s)
Alien Quraso (キュラソ星人 Kyuraso Seijin) were aliens that appeared in episode 7 of the Ultraseven TV series. A race of normally peaceful aliens, a single Alien Quraso - an escaped prisoner and serial murderer known as Prisoner 303 - fled to Earth where he immediately resumed his violent acts, stealing the life force of humans and consuming gasoline. Fortunately, information sent by the other Quraso to Earth was vital in tracking 303 down, who eventually met his end in battle against Ultraseven.

One sunny day a couple hunters went out into a forest to hunt birds when they found a small saucer-like device. With both of them splitting up one of them screamed from the life draining power of Alien Quraso and soon did the same to his friend when he found him. Alien Quraso went to a gas station later that day, draining the life of the clerk, drinking the local gasoline, shocking an unsuspecting woman, and partially draining the life from one of the employees. The employee managed to contact the Ultra Guard before he passed out and soon the squad arrived on the scene, finding the woman, who passed out and the nozzle Alien Quraso fed from. At that moment they heard gunfire which led them to one of the hunters Alien Quraso attacked. Soon after, they found the strange saucer device that was actually a radar jammer and destroyed it with a small bomb. Back at the station that day, the Ultra Guard had been receiving messages from space. One of the TDF agents was able to decipher the message. It was a warning from planet Quraso. A murderer had escaped from their planet to Earth, and they urged the humans to shoot the creature on sight! Alien Quraso appeared that night in a family's garage feeding on spare gasoline when the older son came to investigate a noise. Alien Quraso had the family cornered, except for the younger son who went for help. When the Ultra Guard arrived, Alien Quraso simply fled the house, but he did manage to escape using one of their members and their cars. With her he managed to sneak inside the Ultra Guard's base and took one of their fighters with him in control. The other Ultra Guard members attempted a rescue mission by forcibly docking their three fighters so Alien Quraso could not escape. Dan tried to put Alien Quraso into submission, but his knock out shock and flames made it difficult and soon set the craft aflame. Dan requested that the fighters be undocked so only he and Alien Quraso would be harmed, but before the vehicle hit the ground Dan turned into Ultraseven and survived while he grew much larger. However, before Alien Quraso could do anything, he exploded. At the end of the episode, Earth begins a friendly relationship with Planet Quraso. 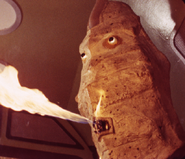 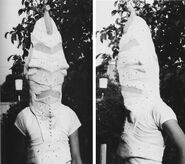 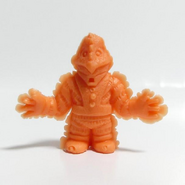