One sunny day a dark cloud created by Alien Poll was set over Japan and quickly turned the country side into a snowy landscape. Dan was stuck in the snow after his cruiser failed to work while the rest of the UG was left without power after a tremor caused by Alien Poll's bioweapon, Gandar. Things became worse as the entire base was without heat and Gandar was in one of the underground rooms as well as Dan nearly passing out in the snow trying to reach the base. Dan was soon contacted by Alien Poll saying they had one because cold temperatures make it difficult for Ultras to absorb needed sunlight. After Alien Poll left, Dan soon found out that the Ultra Eye was missing and started to look for it. After Alien Poll taunted Dan again he summoned Gandar to attack him. To buy more time Dan used Miclas to fight Gandar, keeping him at bay long enough for him to turn into Ultraseven. After transforming Ultraseven went off of Earth to absorb solar radiation from the sun to warm himself up before returning. At the same time the Ultra Guard gained power and was sent out in their fighters to defeat Gandar, who was about to defeat Miclas. After Ultraseven killed Gandar, Alien Poll fled the planet with his cold cloud.

Alien Poll behind the scenes. 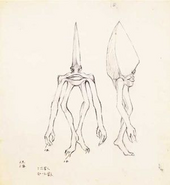