Ultraseven episode 3 "The Secret of the Lake"

Ultraman Z episode 8 "The Mystic Power"
Alien Pitt (ピット星人 Pitto Seijin)[1][2] are an alien race from the planet Pitt. They first appeared in the third episode of Ultraseven. A race of all-Female aliens from Planet Pitt, these aliens have often been drawn to Earth by the planet's natural beauty, which has motivated their kind to attempt to invade the planet on several occasions, normally accompanied by their planet's strongest monster, Eleking. Some Pitts are also benevolent and friendly, being present on Earth or other planets for benign reasons.

Their name was originally Alien Margret (マーガレット星人 Māgaretto Seijin), but was changed to Alien Pitt after the Japanese pronunciation of the word "Cupid".

Alien Pitts, two young girls from another planet, came to Earth for conquest using a harmless looking tadpole by the name of Eleking, which essentially becomes a living electrical weapon. After one of them placed Tadpole Eleking in a fishing lake in Japan, she was followed back to her saucer by two Ultra Guard members and a fisherman. The other Alien Pitt knocked out all four of them with knock out gas and took Dan's Ultra Eye, knowing he couldn't turn into Ultraseven without it. With her sister faking an illness in order to try sabotaging UG's base, the other Alien Pitt used the saucer to turn Tadpole Eleking into his adult form. After the other Alien Pitt jammed some of the base's controls and hijacked a rocket, Dan found the one controlling Eleking and managed to grab his Ultra Eye back after wrestling her into unconsciousness. After Ultraseven destroyed Eleking, and the two sisters reunited in their saucer. The Alien Pitts took off, but the Ultra would not let them get away. After the Alien Pitts' failed attempt to stop Ultraseven with their saucer's ray, they were destroyed by the Emerium Beam. The Secret of the Lake

Another two Alien Pitts return with another Eleking. Their attempts at conquering the Earth included attempting to spread carbon dioxide in the camping area, trying kill an unconscious Ultraseven and kidnapping the son of Anne, Dan (no relation to Moroboshi). In the end, their attempts to kill Seven only awoke the Ultra from his coma. After their monster, Eleking was destroyed, Seven entered their ship at a human size and bested them, rescuing Anne's son and destroying them and their ship afterwards. Ultraseven - Operation: Solar Energy

The Alien Pitts reappeared in Ultraman Max episode 27 and unleashed yet another Eleking.

As Mizuki fell unto a coma caused by a Baby Eleking, its creators, the Alien Pitts, revealed themselves and attacked Kaito mercilessly and left with his Max Spark. After a second full-grown Eleking made itself known, the two Pitts were aboard their ship to assist their creation. The Pitts then converted all the Baby Elekings into energy while Kaito came aboard their ship using DASH Alfa. After the Pitts lost in their true form, the ship was destroyed and Kaito turned into Ultraman Max to end their creation.

An Alien Pitt appeared in the first episode of this series, revealed to be a Reionics. The Pitt Reionics was examining the ruins of Planet Boris in her saucer when she was suddenly attacked by the Reionics Hunter Dail, who destroyed her Battlenizer seconds after she was swiftly killed off.

An Alien Pitt named Myu (ミュー Myū) appeared in episode 22 of Ultraman Orb where she was a customer at Black Directive's Black Star Café.

When the owner chatted with Gai Kurenai about his ongoing conflict with Jugglus Juggler, Pitt threatened to fight Gai, but the owner wouldn't endorse it, giving Gai the opportunity to leave. As it turned out, Myu didn't really like having humans at the café, with them being so intrusive, loud and nosy, and missed the old days when a lot of aliens would show up. Because it was her last time at the café since she had a ship to catch, she decided to have one last cup of black coffee before she left Earth. She even offered Black Directive a ride on her ship but he told her that he and his partner, Nova, will be leaving together. Myu then told him that Dada's ship crashed with some space junk, resulting in him losing the coffee beans given by Black Directive to fly away. Myu then suggested to find a better planet next time and after that, she left.

Alien Pitt appeared as a news reporter for an alien news network, reporting on Saki Mitsurugi's plan to turn Earth into a bomb. A World Without Tomorrow

An Alien Pitt takes on a human form named Hitomi Mizuno (水野ヒトミ Mizuno Hitomi).[1] She lived among humans in a quiet community with her partner, Alien Bat Seiji Komori, but he grew tired of the oppression and taboo of aliens living with humans, which slowly strained their relationship. At some point, they were approached by Kirisaki, who gave Komori a device that can summon Zetton. Tempted by this, Komori began to plot an invasion on Earth, much to Hitomi's dismay. He gets in contact with Alien Hook, who had unleashed Bemular in the city. Komori desired to create a new world where aliens are free to live.

One day, Komori was getting roughed up by a gang, but Homare Soya helped him out. Going back to his house, Komori, Hitomi and Homare got to know each other. While visiting them later on, Homare overheard Komori's conversation with the Hook after Hitomi hints at it. Komori temporarily knocks out Homare and unleashes Zetton, but Hitomi nurses him back to health. During Ultraman Taiga's fight with Zetton, Homare beats Komori, who had resorted to transforming. He is spared when Hitomi arrives.

After the battle with Zetton, Homare visits the couple once more. They are revealed to be resuming their peaceful way of life. For the New World

Another Pitt appeared in the final episode to protect a man from falling debris, despite there an anti-alien protest just moments before. Buddy, Steady, Go!

An Alien Pitt released their Eleking after being arrested by GAF. The Eleking was confronted by Sevenger. Sevenger Fight

A pair of Alien Pitt sisters named Fa (ファ Fa) and Si (シィ Shi) are tasked by Celebro/Kaburagi to gather the essences of Golza, Melba and Super C.O.V. However, Celebro brainwashes them and orders the sisters to steal the meteorite essence of Reicubas and Gan-Q from a rich man. They also kidnap Yoko and Yuka after seeing the two holding Haruki's Z Riser, mistaking both of them as Ultraman Z's human host. Haruki rescues Yoko and Yuka, then leaves the girls to fight and capture the Alien Pitts while he retrieves his Z Riser and transforms to Z to battle a rampaging Tri-King. The Mystic Power 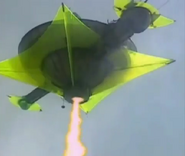 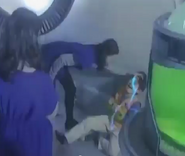 Several Alien Pitt were in ULTRAMAN, all of them dead on appearance.

The first Pitt seen was killed by Agent Adad for being the next hitman that Igaru and friends hired, after Alien Bris died.

Other Pitts were seen in an underground area, killed either by Dan Moroboshi or other SSSP members. 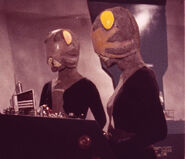 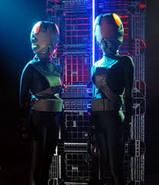 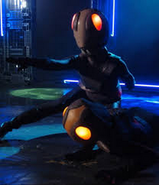 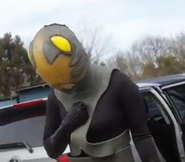 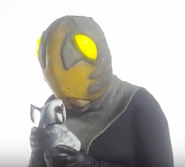 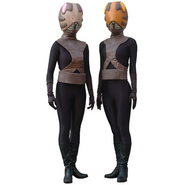 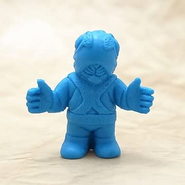 A giant Alien Pitt vs. Windom