Ultraman Taro episode 46 "The White Rabbit Is a Bad Guy!"

None
The Alien Piccola (ピッコラ星雲人 Pikkora Seiunjin) are aliens based on Pinocchio that first appeared in episode 46 of Ultraman Taro. A prince of his home planet, Piccolo (ピッコロ Pikkoro) happened to visit Earth by travelling on a periodic comet, where he befriended a human and discovered the truth about Kotaro Higashi. After being enraged by the cruelty of humans after his friend's pet rabbit was harmed, he took out his anger on a city, but fortunately calmed down after Taro engaged him in battle.

Piccolo was a youngster that liked to travel who also happened to be a prince from the planet Piccolo in the Nebula Piccolo. He came to Earth on the Hertz comet, a comet that shows up in the solar system once every 60 years, because he heard from his friend that particular comet will travel very far and decided to travel on that comet to visit Earth. When he noticed a small child and his rabbit, he accidentally fell off the comet and eventually crashed landed in Japan. He made himself at home at a tower and helped the child and his rabbit from before with transportation powers to keep the poor creature out of harms way and to keep the child happy. In the process, Piccolo shared a psychic bond with the rabbit. Piccolo kept a low profile from the attack team ZAT, especially when he realized that one of them, Kotaro Higashi, was actually Ultraman Taro in human form.

After he flew across the city, and observed other humans, Piccolo decided to return home, but he soon realized that the rabbit had been poisoned, as a result of the link he had created. Enraged by this act of cruelty, Piccolo grew giant and began to destroy the city with his hammer, with his human friend cheering him on. ZAT immediately responded to the massacre by attacking Piccolo, but with little success.

After exchanging fire with ZAT, Piccolo announced to the members of ZAT that Kotaro was Taro's host, but nobody believed him. During this confusion, Kotaro decided it was time to transform and take matters into his own hands, and Taro arrived. The two giants were evenly matched in close combat, but Piccolo kept the Ultra at bay with his hammer and cannon. Taro tried to convince the alien that not all humans were evil, but Piccolo refused to listen, believing the giant of light's words to be lies. In the end, Piccolo eventually realized the error of his ways and decided to concede. The alien prince then asked the Ultra Warrior to help him return home, and Taro agreed, sending him back to his comet, then accompanying him to his home planet.

Another individual of the Piccola race, this time a friend of Prince Piccolo named Poccola (ポッコラ Pokkora) joined the Galaxy Rescue Force under the prince's request. He was a classmate of the prince's father's cousin's neighborhood friend. Andro Melos agreed to take in Poccola and train him, but Ultraman Ribut and Sora doubt his usefulness, especially when he says that he wants to fight Ultraman Taiga to restore honor to his people after Piccolo fought and lost to Ultraman Taro. A New Member

Later, Ribut and Poccola are on a mission because they received an information of a hostile life form on a planet. After having a little chitchat, a Dinozaur approaches both of them. Ribut orders Poccola to stay behind him while the Ultra fights the monster, Unfortunately, Dinozaur had the advantage thanks to his powerful tongue. Ribut was unable to beat it, but this ultimately leads to Poccola to lose control and beat Dinozaur with a single blow. He then explained when he gets angry, he loses control since he was young. 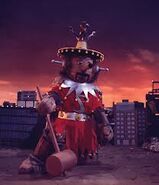 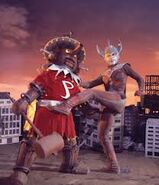 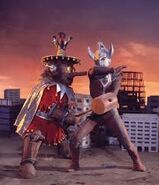 A Piccolo eraser
Community content is available under CC-BY-SA unless otherwise noted.
Advertisement