Ultraseven episode 45 "The Saucers Have Come"

Ultraman Taiga episode 6 "The Flying Saucer Is Not Coming"
Alien Perolynga (ペロリンガ星人 Peroringa Seijin)[1] was an alien that appeared in episode 45 of Ultraseven.

An alien from a distant star, Perolynga came to Earth disguised as a little boy. Far out in space, a fleet of flying saucers, each resembling a star, stood awaiting orders for an attack on Planet Earth. One day, an amateur astronomer, Saburo Fukushin noticed the 'flying saucers'. He called the Ultra Guard but nobody believed him, except for the little boy he would talk to. The two became friends, enjoying discussion about traveling to the stars. The next day, Saburo spotted the flying saucers again. The young man kept calling the Ultra Guard H.Q reporting about flying saucers. However, the space observatories saw only the ships' star-like disguise.

Yet again, no one believed him but the young boy. The boy told Saburo that more ships would appear. He invited Saburo to his house where he revealed to him that he was an alien. The alien allowed him to call the Ultra Guard knowing full well they would not believe him and was proven correct in his assumption. He stated that on his time on Earth, he had heard of the story, "The Boy Who Cried Wolf." Saburo, like the boy in the story kept on calling about the flying saucers to the point where nobody believed him until it was too late. Alien Perolynga then asked Saburo to come with him to the stars, but Saburo refused. Later on the Ultra Guard heard the alien from their machines and they saw a picture showing that the flying saucers were not stars. The Ultra Guard went on the offensive. As they approached the fleet, there were countless flying saucers. The saucers fired their missiles but they were no match for the Ultra Guard ships and their piloting skills. Dan's ship was shot down however and at the last second he became Ultraseven and confronted a giant Perolynga. As the two titans clashed at superluminal speeds the Ultra Guard eliminated the remaining ships. Alien Perolynga was finally defeated and exploded, thus ending Alien Perolynga's attempted invasion of Planet Earth.

An Alien Perolynga appears in a human disguise, simply known as "The Man Who Wants to Return to the Stars" (星に帰りたい男 Hoshi ni Kaeritai Otoko).[1]

He revealed to EGIS that he had once tried to go to the "world of stars" with his friend from Earth. Eventually, his friend couldn't take off, causing him to be left behind.

He waited for about 50 years to be picked up by his comrades and was pleased when Alien Gapiya Abel visited, asking him to take him back into space. He was almost killed by Abel due to him being a witness of his arrival, but was rescued by Kana Sasaki.

After interacting with Kana, he began to change his feelings about returning to the stars and eventually, after Abel was defeated, told his Perolynga comrade who arrived to rescue him that he will "try to live a little more on this planet" before watching the saucer fly off. He had promised to have Soba with Kana, which presumably happened off screen. The Flying Saucer Is Not Coming 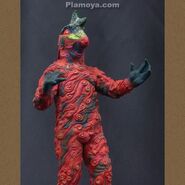 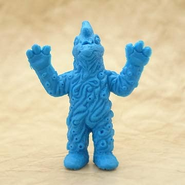 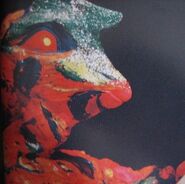 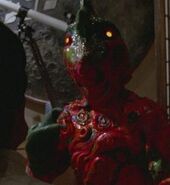 Alien Perolynga Behind the Scenes

Alien Perolynga in a stage show