Ultraman Z episode 7 "His Majesty's Medal"
Alien Pegassa (ペガッサ星人 Pegassa Seijin) are a race of aliens from the planet Pegassa that debuted in the 1967 tokusatsu TV series, Ultraseven.

Alien Pegassa are named after the Pegasus constellation.

Using his Dark Zone disguise, an Alien Pegassa managed to infiltrate the Ultra Guard base, and was quickly discovered by Anne as he was hiding in her quarters. Alien Pegassa claimed to be a friendly alien warning Earth about an impending attack on it's people, and attracted the attention of the entire base's crew. The Ultra Guard was sent into space and found spaceships that were not moving or responding. It was at that moment that Pegassa told the Ultra Guard that the main ship was in fact Pegassa City, his home. The city's power systems were now severely damaged, and it was now on its way to colliding with the Earth. Alien Pegassa told the Ultra Guard that they would have to change the Earth's orbit to avoid collision. Dan and Anne, asked him about Pegassa City, and he told them that Pegassa City was 80,000 times heavier than it appears, and would destroy the Earth if they collide. Dan and Anne asked if there was a way to prevent the collision, but Alien Pegassa only responded, "Just change your planet's orbit", as he was under the impression that Earth's technology was more advanced than it actually was. Dan told him that Earthlings couldn't change their planet's orbit, to which Alien Pegassa got angry and called Earthlings "primitive backwards space creatures", and didn't answer anything after that. The TDF decided to destroy Pegassa City by launching a nuclear missile at it, and gave Ultra Guard time to evacuate the city's population, but the Pegassans that inhabit it believed that the nuclear missile couldn't destroy their city, so they did nothing. The missile, however, successfully obliterated Pegassa City and its populace. Then Alien Pegassa, who was unaware that his home had been destroyed, told Anne and Dan to get away from Earth. He revealed that he was in fact an agent sent by Pegassa City to destroy Earth in case things went wrong. Alien Pegassa escaped from the base into the streets to after summoning a bomb in Anne's room. Dan managed to catch up with him and turned into Ultraseven after Pegassa tried to explain the situation. After dodging several shots from Pegassa's blaster, Seven used his eye slugger to disarm the alien, injuring Pegassa's arm. Sparing his opponent, Seven then used the opportunity to leave the fight and fly into space to disarm the bomb.

This alien reappeared in the episode of Ultraseven EVOLUTION, called "Dark Side."

Decades ago the Earth had destroyed Pegassa City, the alien-made home world of the Pegassa aliens. Since then there have been two types of Pegassa that fled to Earth: ones seeking revenge and ones seeking peace. Those that sought peace tried their best to live silent lives, hoping that their true forms would not become known to the public. This ideal would soon be disturbed when a new force of Pegassa hoped to destroy mankind using a weaponized form of the Dark Zone.

The only thing that could stop the invaders was a device built by the peaceful tribe, that could stop their plans. One of these infiltrated the compromised TDF to retrieve the part needed, but died. However, he managed to hide the piece leading the Ultra Guard on a mystery that lead them to the truth. During their mission, a Pegassa abducted one of the 2 members when she stopped the other from shooting him. He later abducted Satomi, who had been returned to her duty as an Ultra Guard member. In his Dark Zone, he revealed to her and Rumi that he was part of the peaceful faction and he discussed the situation about the war faction's plot before dropping them off.

As Sayuri revealed to be a Pegassa in disguise, Yuki tried to shoot her albeit reluctant. Sayuri explained that she was a leader of the Peaceful Faction of her alien race and that she lost her child during the destruction of Pegassa City. Yuki remembered that during her childhood, a Pegassa, while retaining her human disguise, popped out from the Dark Zone. However, Yuki was interrupted by another disguised Pegassa who was about to shoot her, Satomi and Sayuri only to be killed by Kazamori, who had the piece of device with him. However, Dark Zone weapon was suddenly activated but Sayuri decided to sacrifice herself in order to end the attack while she wanted to protect her orphaned children. Holding the completed device, in which its shell was the carouel-shaped orgel, the elderly woman transformed into a light and entered the golden mass of the Dark Zone Weapon, ending the threat. The Pegassa conquest plan was ended, but at the dreary cost of the soul of a very humane alien.

An Alien Pegassa named Pega (ペガ Pega) appears as a supporting character in this series.

An Alien Pegassa appears in an episode of Ultra Super Fight, wandering through a hot, sandy park with a chain tied around his neck. It is made clear through a flashback that Pegassa was beating an Alien Metron with chains until the chain broke, then Metron fought back, chasing Pegassa down then wrestling him while whipping him with the same chain his captor had used on him. After Pegassa blacked out, Metron bound Pegassa with the chain to remind him of what he had done. In the present, as Pegassa finished recalling what had happened, he fell unconscious from his injuries.Memories of the Chain

Another Pegassa, possibly the same one, appears being beaten up by Pandon on a hillside. Taro arrives to intervene, holding an Electric Guitar! Ultraman Taro walks down the hill, and begins to reprimand Pandon, but Pandon begins to whale on Taro. Pegassa remembers that it was Taro who defeated him earlier, and begins to panic. However, he soon rushes forward, and helps Taro fight Pandon, punching the space-bird and knocking them over. Taro congratulates Pegassa for his success, but Pegassa punches Taro, thinking that Taro is Seven! Taro tries to apologise, but Pegassa only gets angrier, and the two begin to fight. Pegassa's head gets stuck in a tree, and Taro leaves holding his guitar.The Wandering Ultraman Taro

Pegassa later appears alongside a bright yellow Woo in a park, smoking tobacco while the Ice Kaiju (presumably his wife) gives him a shoulder massage. Pegassa spies Taro walking past, and sends Woo to fight him, but Woo comically throws herself on the ground while trying to jump Taro, and then gets reprimanded by the Ultra. Woo returns to Pegassa, who bashes her on the head several times with his tobacco pipe, and sends her to fight Taro again.

Woo prepares to fight Taro, but gets scared when he cracks his knuckles loudly, and tries to walk off, but Pegassa decides to join the 'fight' himself, whacking Woo with the pipe again, until Woo decides to fight Pegassa instead!

Taro tries to break up the fight, but gets tossed aside, and fights both the Kaiju and the Alien himself, defeating them easily. The two injured lovers struggle towards each other, only to pass out simultaneously. Taro places their hands together, and pays his respects to the fallen duo.Cowardly Monster

An adult Alien Pegassa named Bega appears in the series as an AIB agent sent to monitor Riku and Pega at Beyond School. However, Riku often mistakes this individual for his friend, Pega, must to the young alien's dismay. Ultraman Chronicle: ZERO & GEED 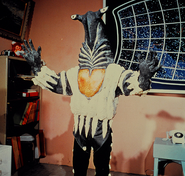 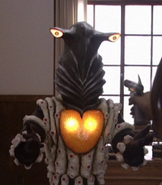 An Alien Pegassa (background) with an Alien Metron, Eleking and an Alien Icarus 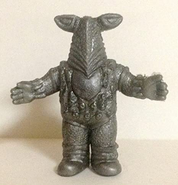