None
Alien Pega (ペガ星人 Pega Seijin) was an alien that appeared in Ultraseven episode 36.

One day, a high ranking official of the TDF was being escorted when three men in black showed up in a back road and began firing. Although two of them fled and the last one escaped they managed to kill their target while wounding his body guards. Later one of the generals of the Self Defense Force managed to nearly kill one of the two body guards as he began to suspect something and brought him back to a saucer. It is one the saucer that he revealed himself to be an agent of Alien Pega where he started to interrogate the body guard for information. During another armed escort that day the possessed general managed to capture one of the Ultra Guard's members and would have escaped had the escort not been thought ahead and allowed the rest of the squad to take a secret tunnel to follow him. After the general was shot down, Alien Pega arrived at the scene with his saucer and began to open fire. After Dan turned into Ultraseven, Alien Pega turned his attention to the hero and unleashed his weapons on him. After some flat palm blasts failed to do anything to the saucer, Ultraseven reduced his size to that of a human and entered Alien Pega's saucer. After a quick shot of the Emerium Ray, Alien Pega began to inflate and the saucer was soon destroyed with the Wide Shot. 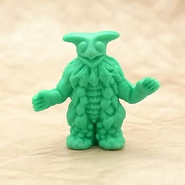 Pega Seijin Being Hit with the Emerium Ray

Alien Pega behind the scenes

Alien Pega in a stage show