Planet Pedan of the 8th Galaxy[1]

N/A
Alien Pedan (ペダン星人 Pedan Seijin)[2] is an alien race from Ultraseven. A race of aliens known for their highly advanced technology, the Pedan are warmongerers, intent on conquering other planets through the use of their military might, and are best known for being the original creators of King Joe, one of the Ultraman Series' most iconic robots.

Their name comes from the katakana translation of the word "Pedantic".

After an observation rocket sent by TDF to Planet Pedan was mistaken as an invasion attempt, the people of Pedan began retaliate by first sending off their threat to Washington. In the present day, they secretly arrived and kidnapped the American scientist Dorothy Anderson who was on her way to Japan, replacing her with an impostor and destroy identification documents of her escort Melvin Webb. "Dorothy" soon made her way to Japan and assassinate three other foreign scientists that went undercover before taking refuge in UG. After the submarine escort Arthur was destroyed, "Dorothy" escaped when Melvin exposed her and left King Joe to attack the Defense Center in Rokko Mountains.

"(laughs) Nice job! Beautiful! This is our chance to launch the attack! The moment I saw that beautiful planet I swore I'd conquer it myself. I'll give the order to stand by for a full-scale attack."

The next day, Dan Moroboshi confronted "Dorothy" and try to clarify the true intentions of the Earthlings. Seeing through his true nature, she complies and return the original Dorothy amnesiac but double crosses the deal after taking a liking towards Earth's beauty and wanted to take it as their own. The Earth agent already made their move by having King Joe attack the Kobe pier while a troop of spaceships were already on their way. Dan participated and fought as Seven after being duped by the Pedan spy. After King Joe's destruction by the Ryton R30 Bomb (manufactured with the real Dorothy's help), the Pedan agents try to escape with a saucer until Seven gunned them, forcing the rest of the invasion fleets to retreat.

A Pedan soldier was stranded on a strange planet which Io Mikura happened to be in as a result of Bullton. Their friendship was short-lived when he sacrificed his life to protect Io by ramming an Alien Hipporit with his King Joe. Io would later encounter a group of Alien Pedan led by Captain Dorothy (ドロシー艦長 Doroshī Kanchō), who sought the Reionics' help to end their war against Nackle in exchange for a trip back to Earth. During the battle, they try to use their own replica of Battlenizer but failed and the entire forces died from the battle.

"That material... its Pedanium alloy. Could it be the Alien Pedan's ships?"
"Alien Pedan?"
"They've already destroyed all civilization on seven planets. You can be sure they won't negotiate!"

Alien Pedan are mentioned in episode 11 of Ultraman X. After King Joe lands on Earth and begins assaulting the planet, Gourman theorizes that King Joe is being owned by a group of Alien Pedan, after it is discovered that King Joe's armor has been reinforced with Pedanium.

An Alien Pedan reappears in this series as an AIB agent. He, along with his colleagues watched the activities of Kei Fukuide from the AIB base. When Kei discovered them observing him, he destroyed the field agent's disguising device and compromised the mission, leading to the control panel where the alien stood to malfunction.

A Pedan was one of the aliens Homare Soya had to fight before his days at EGIS. Requiem of the Wolves

In episode 17, a few Pedan thugs hunted down Alien Semon Meed, who had stolen a monster-controlling device they had made. Meed went to EGIS to escort him as he knew he was being hunted down, and needed to reach his contact. The Pedans eventually caught up with him, starting a brawl between them and the EGIS members. Kirisaki also killed one of the Pedan thugs and stole their blaster, which he then later used to "accidentally" kill Meed during his arrest. Guardian Angel 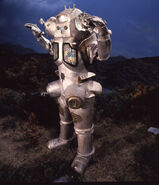 Two known Alien Pedan appeared in this game installment, both of which wears a set of Reionics Hunter armors.

Larva (ラルバ Raruba) is a young Alien Pedan that the player encountered in his mission. Despite his rash behavior and pride in his planet's science, he is in fact a Tsundere nice guy to the player.

His rash behavior stems from his frantic and fear of Belial taking over his Planet and held the entire population as hostages. After said Ultra defeated, he decided to join the player in maintaining peace in galaxy, at the same time forming a rival/older brother-like figure to the latter.

Ash (アッシュ Asshu) is the leader of a Planet Pedan caravan troop. After the player liberated their planet from Ultraman Belial, Ash serve as a supplier to the former.

She was originally an Alien Pedan invader who defected after falling in love with a defense force member named Yamamoto. Sometime after marrying him, she was revealed to be 3 months pregnant.

An Alien Pedan is revealed to be the leader of an organization called Dark Star. He is also in possession of a man-sized combat robot called as Golden Fortress.

As part of the "HG Ultraman Series" gashapon toy celebration, three sets of aliens that had fought the Showa Ultras, Yapool Man, Alien Pedan and Black Directive was released. The set can be sold on available gashapon machines at Japan while shipping would be available in November 2014.

Alien Pedan was released alongside with a table cockpit that used to pilot King Joe. 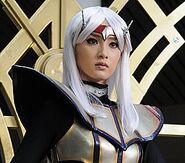 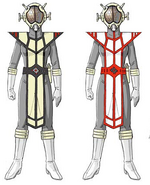 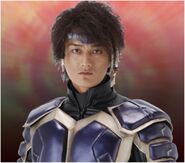 The classic Alien Pedan in the stage show.

Padan in episode 27 of Kaiju Walk