A peaceful alien race, two children were sent to Earth by their queen without the intention of an invader. When one of them was bullied by several people, an old man rescued him. Feeling in debt for his generosity, the old man was brought to their submarine where the queen wished to speak with him, at same time inviting him for a meal. Later, two Alien Paradais set to kill the humans that bullied one of their members earlier out of vengeance. Once the two bullies were about to be killed, Gen quickly appeared but the two Paradais quickly disappeared. The child of the Alien Paradai later contacted the queen, telling her that not all humans were considered as threats.

Later, the two Alien Paradai merged themselves to form the monstrous King Paradai as he quickly started his assault on the small seaside town. The MAC reacted quickly and King Paradai was attacked by the two MACCY's. Blinding them with his smoke, King Paradai knocked them out of the sky by sending out a volley of his powerful energy rays. Arriving to the scene, Gen Otori wasted no haste and quickly transformed to Ultraman Leo, taking on King Paradai. Shrouding himself in smoke, Leo was unable to land any blows. With the battle in King Paradai's favor, landing many powerful blows with his tail, but once Ultraman Leo managed to get behind him, his winning streak took a dive after his tail was tied in a knot. Ripping off his horns, Ultraman Leo flipped backwards and used them as a pair of shuriken, throwing them King Paradai's way. Aware of the incoming attacking, King Paradai rolled himself up into a ball, but the blow was too powerful and sent him flying into the air where he was finished off by Leo's deadly Cross Beam. With King Paradai defeated, the Alien Paradai sub sank into the depths, never to be seen again. 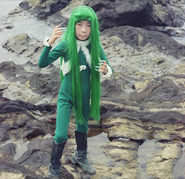 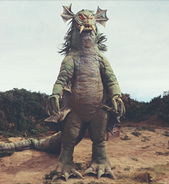 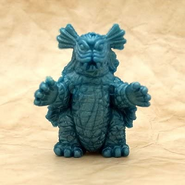