Ultraman Dyna episode 46 "The Power of Thinking of You"
Alien Nuaza (ヌアザ星人 Nuaza Seijin) are a race of aliens in the series Ultraman Dyna. However, the only member of this race to appear in Ultraman Dyna was the last emperor of the race, Eshilis (イシリス Ishirisu). Eshilis later reappeared as an illusion in Moravia's Phantom Monster Army.

Very little is known of the Alien Nuaza, only the fact that they had developed a hieroglyphic writing system and were ruthless conquerors, calling themselves the "kings of space". The Nuaza were fierce believers of the afterlife and built tombs on conquered planets (such as the moon) and created valley to house them, the former being called the "Valley of the Kings". The Nuaza created mummies and had a very religious society. However, due to the constant warfare on their planet, Planet Nuaza, their empire eventually imploded, bringing the Nuaza to near extinction 1.2 billion years ago. However, before the end came, the last emperor, Eshilis, was able to preserve his body and soul for the afterlife.

Over a million years of ago, Eshilis was the last king of the Alien Nuaza and had the strong belief that the powerful have the duty to eliminate the weak. Eshilis died to a successful assassination from one of his conquered races. However, Eshilis's spirit lived on in the afterlife as he continued to dream of his goal as the emperor of space. His chance came when the Super GUTS member Kariya and a team came to investigate his tomb. He possessed Kariya to use the Super GUTS machinery for his plan to destroy Earth, but was halted by his old enemies: the three assassins. They possessed the rest of the team to try and kill Eshilis again, but this time, they failed. Eshilis quickly left the scene and turned giant-sized on the moon using the old Nuazan idol as a body. Ultraman Dyna soon appeared and the two fought, while the three assassins opened Eshilis's grave, being his only weakness. Kariya used the sacred sword, previously used to kill Eshilis centuries ago, and stabbed the center of Eshilis's corpse. Eshilis was weakened, and Dyna finished the fight by turning into Strong Type and punched Eshilis square in the chest with the Strong Punch, sending Eshilis flying into space before exploding. The Supreme Ruler Who Sleeps on the Moon

In episode 46, Moravia temporarily uses Kariya's fear to manifest a replica of Eshilis before revealing his true form. The Power of Thinking of You

The Nuaza did not have any documented powers. However, theorizing from their emperor, Eshilis, it can be concluded that the Nuaza have most, if not all, or these powers:

The abilities of Eshilis however still lives with him when possessing the statue: 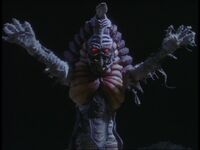 An official Tsuburaya art for Alien Nuaza
Add a photo to this gallery
Retrieved from "https://ultra.fandom.com/wiki/Alien_Nuaza?oldid=527554"
Community content is available under CC-BY-SA unless otherwise noted.