"I still can't understand humans. Why don't they fully utilize the resources of their planet?"

―Alien Nowar asked on why humans didn't enslave monsters like them, Puppet Monster

Hailing from the Planet Nowar of the J34 Solar System, these aliens desired to modify any monsters into living weapons for their own purposes. However, after all of their monsters died, they went to the Earth and captured Taildas, modifying it into Taildas Mechalator. However, the experiment failed as the monster died due to cybernetic poisoning. They also tried to capture Musashi upon discover his ability to communicate and tame monsters. After one of them failed to do so, Neldorand Mechalator was released in order to destroy the town but this was stopped by Cosmos, who uses the Cosmium Ray to destroy the cybernetic parts though Neldorand met a similar fate to Taildas. Puppet Monster

After they discovered Arados, a time-manipulating monster, Alien Nowar communicated to the EYES Base and demanded Arados, in return, they would heal the monster and Earth would no longer be targeted. After a talk with the JADF Army, they decided to object Alien Nowar's offer and give it to the army for if the monster died the autopsy would be beneficial to humanity, something which Musashi disagreed with. Getting impatient, the aliens attempted to kidnap Arados via their spaceship. Luckily, EYES managed to free Arados but the Alien Nowar launched Ragstone Mechalator to battle Team EYES. Ultraman Cosmos appeared and battled the cyborg monster but was quickly overpowered by the monster and flying saucer teamwork. Arados used the last of power to banish Ragstone Mechalator into another space and time and seemed to finally die from exhaustion. Cosmos furiously destroyed the Alien Nowar spaceship and flew away. Future Monster 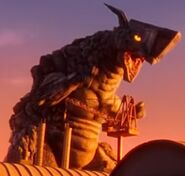