Ultraman Geed episode 24 "The Fragments of Hope"
Alien Neril (ネリル星人 Neriru Seijin) are aliens from the Planet Neril. They were introduced in 25th episode of Ultraman Max, "A Distant Friend", when one of their people Keef (キーフ Kīfu) came to Earth.

One night, a meteorite fell into the Earth with a smaller one separated from it and entered a house where it approached a boy and asked to appear itself by morphing into it's true form and later into a basketball player from a magazine. The alien introduce himself as Alien Neril Keef and the boy as Kakeru. Keef revealed the boy his background as a space pilot from Planet Neril where the planet's life was going to end so he journeyed in space to find a suitable planet for his friends. But failed to locate one, he returned but devastated to discover that his homeworld destroyed so he migrated to Earth instead and ended up in Kakeru's house. The next day, Kakeru guided Keef to a park where the alien quickly befriended almost everyone in the park and fascinated with the park's beauty but later devastated that he needed to remain in human form since humans sees most aliens as hostiles. With DASH appeared patrolling the park, Keef turned himself to them and quickly sensed "something" within Kaito. At Base Titan, UDF scientist distrust him as they put the alien under custody but Kaito opposed this, knowing the alien's pacifist nature. Despite this, DASH allowed them but warned that they will be responsible if the alien died. Kaito visited him as Keef identify the man as Ultraman Max, Earth's protector and he asked why Keef didn't run away instead of facing them. The alien replied that various alien races in the past tried to invade the Earth so he felt that the scientists' study on him is deserved. Before he would be dragged to Hague institution, Kakeru visited for the last time. Suddenly, Alien Godley appeared and terrorized the city. Ultraman Max appeared and fought him but instead was overpowered as the alien was able to regenerate from its injuries. Unable to witness innocents be killed in front of him, he sacrificed himself by turning into giant energy form and took the blow from the evil alien. Max avenged his death by summoning the Max Galaxy and terminated Godley with Galaxy Cannon.

A picture of an Alien Neril was on the board of the Black Star Cafe. It was also disguised to show a man in a grey jacket and green shirt.

An Alien Neril reappears in Ultraman Geed as an AIB undercover field agent field agent. When tasked with observing Kei Fukuide, Kei caught onto their plan and destroyed the device keeping the alien disguised. The forceful removal of the disguise caused it great pain and compromised the mission. When trying to flee with a human agent, it was struck down by Kei's cane. 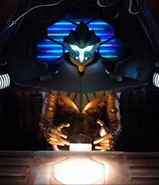 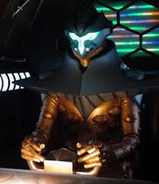 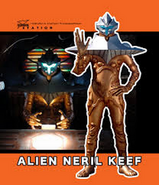 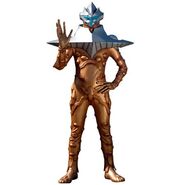