None
Alien Naltis (ナルチス星人 Naruchisu Seijin) is an alien from the planet Naltis, she first appeared in Ultraman Dyna episode 33 "Star of Peace".

A mad biologist from another world, Alien Naltis studied GUTS/Super GUTS and their previous battles against monsters and alien invaders while desired to create Menorfa in order to conquer Earth. But she wasn't able to complete it since the process required lots of negative emotional energy. Given that she couldn't use the other Naltisians due to her kind being a peaceful race, her journeyed to Earth, kidnapping humans in order to extract their negative energies starting with a group of delinquent rollerskating teenagers. Among them was Sonoka, daughter of Gosuke Hibiki, Super GUTS's captain. When she successfully kidnapped Asuka, Captain Hibiki, Sonoka and Hasumi (her boyfriend), she began to extract the negative energies from them until she was stopped by Super GUTS. Naltis made her final move by fusing herself with Menorfa. Once Alien Naltis fused with Menorfa, the blob monster grew extremely large, giving Asuka no other choice but to turn into Ultraman Dyna. Once the battle began Dyna had an extremely difficult time doing anything to Menorfa. When the Solgent Beam was unable to work Hasumi noticed a bruise on Menorfa from where he threw a metal pipe from when the blobish monster was growing. Once this area was hit by Hibiki when he piloted the GUTS Eagle Alpha Superior, Dyna went into Strong Type and executed the Dyna Tornado Attack, destroying Menorfa and Alien Naltis. 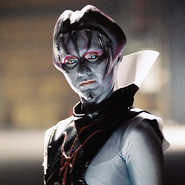