Return of Ultraman episode 49 "Space Warriors - Your Name Is MAT"

Redman episode 56
Alien Mysteler (ミステラー星人 Misuterā Seijin) were a pair of alien brothers, one good and one evil, that first appeared in episode 49 of the TV series, Return of Ultraman. The two could be told apart by their torsos and size - the good was slightly smaller and had stripes, while the evil was larger and had circular bumps over his body.

The Alien Mysteler have been at war with Alien Ateria for thousands of years. One however rebeled and was against the war and fled to Earth to save it. However a Mysteler who was for the war went to Earth to capture him. The "evil" Mysteler arrived in the mountains and a metor crashed, and MAT was quick to respond, but their planes froze and were trapped in the air.

Sometime later, a man saved a boy from falling of a cliff, the man revealed himself to Go as an Alien Mysteler and left. Later, in a spaceship, the two aliens argued about the one trying to become friendly with humans. He told him if he did not follow his plans and capture Go, he and his daughter would be sentenced to death.

The evil brother hypnotized the MAT team into capturing her daughter while he froze Yuriko and Jiro. The good brother then told Go that they had to meet at the lake for a fight despite Go's unwillingness. At the lake, Emi (the alien's daughter) then found her father and there was no fight between them. The evil brother soon turned giant and rose out of the lake, causing the good brother to turn gigantic and fight. Soon the good one was shot and was forced to shrink. Ultraman Jack appeared and soon used his Ultra Bracelet and cut of the aliens' snout. Despite the alien's proposition to let him join in the war, Jack refused to and so then alien then sent the tranced team to attack him. Ultraman Jack then fired a Spacium Beam at the alien caused him to go back to his ship. With MAT freed they then chased down and destroyed the shuttle, the good alien then thanked Go for helping him and the two disappeared.

Though Mysteler did not physically appear in this series, it is stated that Planet Mysteler was still at war with Planet Ateria partly due to it being aggravated by Alien Psychokino at some point.

Alien Mysteler first appeared in episode 51 of Redman where he fought Redman alone. He started the fight by charging at him, dodging his Red Knife, and jumping behind him for a sneak attack. They then went into an evenly matched fight where the alien even managed to survive the hero's Red Chop and throw him into the ground a few times. In the end, Alien Mysteler was killed when Redman threw his Red Arrow up his trunk.

Mysteler reappeared in episode 54 where he engaged with Redman's Red Arrow with a stick all the while getting support from Dangar, even though he was downed by the alien hero at the moment. After the sword fight ended, they engaged in close combat before the hero ended that fight with a Red Knife to the torso. After Redman killed Dunger, he used his Red Arrow to end the alien's life.

In episode 55, after Redman defeats Arstron, Mysteler appears from the top of a hill to challenge the alien hero once again. Their evenly matched fight sent them back to that hill where they would keep duking it out until Redman used his Red Knife to stab the alien and sent him tumbling down.

Alien Mysteler's final appearance on the show was in episode 56, where he along with Arstron, decided to team up to help Sartan take out Redman. Event though the three held the team advantage against him, the alien hero still held his own against all three of them via one at a time. Mysteler then engaged Redman alone after he killed Arstron and seemingly killed Sartan. He was eventually killed by a Red Arrow impalement and Sartan would soon follow.

Figures of the Alien Mysteler by Bullmark 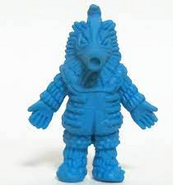 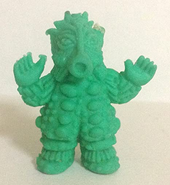 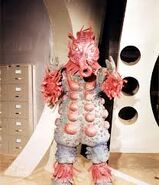 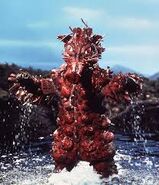