Ultraman Tiga episode 42 "Town Where the Girl Disappeared"
Alien Muzan (ムザン星人 Muzan Seijin) is an alien that appears in Ultraman Tiga. He is a hunter and takes his victim's bracelets back to his home planet.

An alien hunter, Muzan sent two pods to Earth, each containing aliens named Rucia and Zara. After pursuing Rucia and being discovered by GUTS, he chased Zara and killed him. He later killed Rucia and, after GUTS shot him, grew to giant size and began to attack. GUTS couldn't hurt him, so Daigo summoned Ultraman Tiga to fight against the alien. All went well until Tiga grabbed his head and the hunter revealed that his head was on his tail. Walking on all fours he charged Tiga and was beating Tiga down until he turned into Power Type. He swings Muzan around by his neck and throws him to the ground. Tiga then fires the Deracium Beam Torrent, killing the evil hunter. 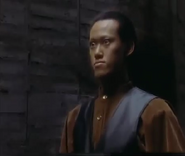