None
Alien Monera (モネラ星人 Monera Seijin) are a group of intelligent aliens whose nefarious motif is to invade Earth. While aboarding the spaceship Monera Seed (モネラシード Monerashīdo), they finally appeared and fuse themselves with their spaceship to form the gigantic Queen Monera (クイーンモネラ Kuīn Monera).

The Alien Monera first test the strength of Ultraman Dyna by releasing Geranda. After it was proven equally matched, one of them assimilate Dr. Kisaragi and orders the giant battleship, Prometheus, and destroy Geranda. With the battleship holds Dyna's combat techniques, they use their spaceship, Monera Seed to "mollusionizing" into become the demonic Deathfacer. Later, after Deathfacer was destroyed in K3 District, the Monera Seed reappeared. Inside the ship, the Moneras combined their bodies and minds with the ship to become the collective known as Queen Monera. Ultraman Dyna, tired after the battle with Deathfacer, flew upward for combat, but was caught by Monera Seed's tentacles and thrown into her abdomen. There, constant bolts of QW Electricity assaulted Dyna. Finally, after more than two minutes of struggling, Dyna's head went limp, and died. However, a young boy with an Ultraman Tiga figure is able to get everyone to believe in the light, and everyone lends their 'light' to bring back Ultraman Tiga. Tiga miraculously appears bathed in light, at once freeing Dyna, before the two of them confronted Queen Monera. After blasting off several tentacles, the heroes were caught in the neck by more tentacles but was freed by Super GUTS. They flew into the sky and unleashed the TD Special, destroying Queen Monera for good and making the Moneras extinct. Ultraman Tiga & Ultraman Dyna: Warriors of the Star of Light

Deathfacer
Add a photo to this gallery
Monera Seed

Mollusion
Add a photo to this gallery
Queen Monera

Crown Beam
Add a photo to this gallery 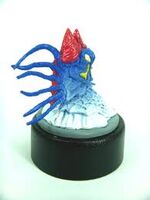 Queen Monera pencil sharpener
Add a photo to this gallery

Queen Monera was released as a figure in a box set titled "The Warriors of The Star of Light" in conjunction with the movie. However, the figure was not made to scale and is very much undersized when compared to the Ultraman Tiga and Dyna 6 inch battle style figures that also came in the box set. The box set also came with a miniature Monera alien.

Add a photo to this gallery
Retrieved from "https://ultra.fandom.com/wiki/Alien_Monera?oldid=535245"
Community content is available under CC-BY-SA unless otherwise noted.