"Ahhhh. Ultraseven, at last, we thought you would turn up sooner or later."

None
Alien Mimy (ミミー星人 Mimī Seijin) was an alien that made a non-physical appearance in Ultraseven episode 21.

The Ultra Guard was sent in to investigate a matter involving disappearing ships and launched two new submarines: The TDF HRs 1 and 2. After one of them escaped a whirlpool they spotted a Alien Mimy star-like saucer under the water and was in pursuit. The space ship managed to outmaneuver both submarines in the rocky coral and used special bubbles to jam communications. With the submarines incapable of doing anything Iron Rocks was commanded by the Alien Mimy to surface and scare of the population of a local harbor town. Iron Rocks returned later that day to inflict catastrophic damage to the community and the Ultra Guard was incapable of so much as scratching it. The situation grew worse when Dan was shot out of the sky with one of the Ultra Guard's fighters, but after that the assault continued with the other fighter and managed to blow a hole in Iron Rocks. However, the Ultra Guard was forced to stop due to analysis indicating that Iron Rocks was actually an armed bomb. Upon the cease fire Iron Rocks remained stationary for the rest of the day and into the night until Alien Mimy called on it to fire on the town once again. The explosions managed to wake up Dan in his fighter and allowed him to turn into Ultraseven. After Alien Mimy taunted Ultraseven, he had Iron Rocks use its chains to prevent Ultraseven from moving around so that the bomb could go off, but it failed as the hero used the Energy Cartwheel to unchain himself, then used the Emerium Ray to set Iron Rocks aflame and make it explode. Alien Mimy tried to retreat in his saucer, but the TDF HRs shot it down and it exploded and their invasion ended. 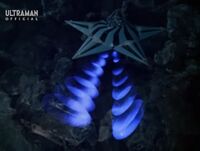 Spaceship
Community content is available under CC-BY-SA unless otherwise noted.