The three Alien Mijir decides to conquer other planets and use them as colonies. Garaon was designed as a monster with three faces atop a 344-meter body. The parts had protective covers slipped on and were secretly shipped to the abandoned toy factory for the aliens to construct and conquer Earth. However, due to the alien's clumsiness, their passage to Earth was discovered by a young boy who then proceeded to report to Super GUTS. However, the alien's disguises, camouflage, and the boy's own nature of being a liar led Super GUTS to not believe him. After bringing the boy to his home, Asuka borrowed the boy's comic book without his permission, thus giving the boy a grudge against him. That night, The boy went to the factory himself, and saw the aliens again. Going to a telephone booth, the boy called Super GUTS and when Asuka took the phone, the boy demanded him to come back to the factory. Although persistent at first, Asuka was finally forced to come when the boy threatened to tell Captain Hibiki about him stealing the boy's comic book. After going into the factory, Asuka frequently attempted to leave, only to be stopped by the boy's same excuse over and over again. Finally, a fake wall was found and the aliens were also found assembling Garaon's head. The leader of the Mijir's sent his two clumsy minions to capture Asuka and the boy, and after the capture, showed Asuka their plans on a computer. Suddenly, the sun came up, and the aliens began to admire its beauty. While they're distracted, the boy threw mini-firecrackers at the aliens, freeing himself and Asuka. Then a short gun fight followed, with the aliens accidentally destroying their own protective cover. Finally, Garaon's head was launched with the aliens as pilots. Ultraman Dyna soon followed the invaders, but was quickly beaten down by Garaon's happy face's laughing gas. Super GUTS then struck, but was met with failure when GUTS Eagle Gamma was shot down by the sad face's tear beams and the rest of the fighters kept back by angry face's eye lasers. After Dyna recovered from the attack, he transformed into Miracle Type and split into three. With each of the three Ultras attacking a different face, Garaon had to retreat to the sky. The three Dyna's then merged back into one, and began dodging Garaon's barrage of beams. Finally, Dyna used his Energy Beam at the beast and struck it down for good. Monster Factory

But fate would have it that Garaon was not destroyed and has most of its functions still intact. The three unfortunate aliens have been exiled from the Miji planet and are now trapped on Earth. In order to relieve their humiliation over the defeat of Garaon, they created a poor, hand-made version of the actual 400-meter tall Garaon named Kogaraon out of cardboard, tinfoil, and wires. The Mijir uses a mechanical claw to destroy an Ultraman Dyna action figure. However, the process only lasted 13 seconds as Kogaraon suddenly emitted sparks and exploded.

Still vowing for revenge against Dyna, the three aliens came up on a script written by a movie script writer who lives next door. The Mijis were enthralled by their find and hired the writer to write a script for THEM and have the characters as Ultraman Dyna, Super GUTS, and their Garaon. The script had them suddenly power-up and create a hologram of Garaon on the sky. Asuka and Ryo will then attack the hologram from the back and the front, but will destroy themselves in the process. The real Garaon will then rise and capture GUTS Eagle Beta in its arm and command TPC to surrender. Ultraman Dyna then appears, but Garaon threatens him with the fighter in its claw and commands him to stay still and take every hit the robot causes. Soon, Dyna will collapse and then, his color timer will go out and he will perish. The aliens were astonished by the script and followed it exactly. But it was then that one of them sneezed and turned back into his alien self. The writer was then horrified when he heard that the aliens took his plans seriously. A hologram Garaon appeared in the air and Asuka and Ryo approached it. Asuka found out it was a hologram but Garaon still managed to knock Asuka out. Dyna then stepped and began to attack Garaon. The Mijis, now feeling hopeless, prayed to the sky. Suddenly, a lightning bolt struck Garaon and recharged its dead batteries. Now all Garaon had to do was attack. Dyna soon fell to the attack but rose again when the aliens wasted all of their power supply. Dyna then proceeded to destroy the machine with his Solgent Beam. The three were later revealed to have survived from the previous Garaon's destruction and acted out the writer's new script, inspired by the true events. However, when a cloud of dust was blown by the wind, their true identities were revealed, much to the horror of the film crew. Scenario of Invasion

The aliens continued their quest for invasion, and created Pudgy Garaon. While trying to run away after Arwon's rampage, they stumbled on Hanejiro, whom returned to Earth in the form of an yellow egg. The three, despite being villains, were very protective of him and protected him from prying eyes until Hanejiro returned to Super GUTS, revealing he was sent by Alien Fabiras to warn them about the monster Arwon and it's master, Casa Madara, whom also revealed to be the monster's main component. With Dyna defeated by Wanzetto, Super GUTS have no choice but to seek Alien Mijir's help as they created Pudgy Garaon. They sent Hanejiro to drop the robot into Wanzetto's cranial cavity and use it to bash its head, destroying the android host until it fell. Unfortunately, the Mijir's discovered that they now had control of Wanzetto. Just as Dyna was freed from his stone prison, the Mijir's attacked. But since the android within Wanzetto was destroyed, it could not activate Wanzetto's ultimate attack. The aliens, who did not know that, broke the controller when trying to activate the attack. Pudgy Garaon and Wanzetto were later destroyed when hit by Dyna's Revolium Wave. The Alien Mijir later ran away as they were chased by TPC personnel. 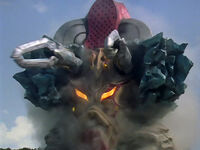 Wanzetto
Add a photo to this gallery

Released exclusively as a High Grade-styled set for the Hyper Hobby DASH!! magazine, this figurine of Alien Mijir is bundled with Ultraman Dyna Strong Type and the rest of the monsters/aliens appearing in between episodes 13 and 31. This Mijir represents Dolchenko.

Alien Mijir in Ultraman Dyna: The Return of Hanejiro
Add a photo to this gallery

Alien Mijir in the stage show.
Add a photo to this gallery
Retrieved from "https://ultra.fandom.com/wiki/Alien_Mijir?oldid=527779"
Community content is available under CC-BY-SA unless otherwise noted.