A member of the Alien Migelon by the name of Reda was traveling in his saucer with his fiance, Reka, when the derelict defense satellite Angelica fired on them. Unable to save Reka, Reda came to Earth to exact his revenge. Shortly after hypnotizing Ayano, Reda had her hijack the satellite Angelica to destroy Jermina III. EYES attempted to stop his plan only for shockwaves from his bracelet to knock them all out save for Musashi. Before Musashi could talk Reda out of destroying the satellite he summoned Angrilla to attack an oil refinery. Once Musashi turned into Ultraman Cosmos and left to fight Angrilla, it would seem as though Reda won until Reka revealed herself to have been hiding in Ayano's body. After she managed to talk Reda out of his attempt at revenge, he used the energy in his bracelet to cancel the satellite's collision. With his body at its limit, he collapsed and both of them turned into green light particles. 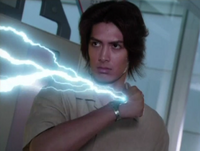 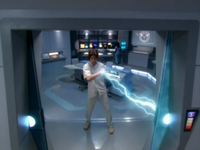 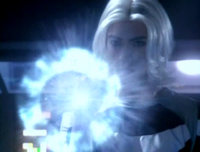 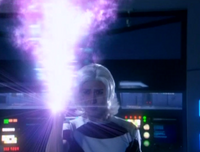 Retrieved from "https://ultra.fandom.com/wiki/Alien_Migelon?oldid=510060"
Community content is available under CC-BY-SA unless otherwise noted.