"I'll be seeing you defeated and fall into a deeper despair and die in despair. In other words, I will not kill you with own hands. Your meaningful Crew GUYS will do the deed for me. [...] You're all alone now, and nobody will be helping you.*laughs*"

Daisuke Fukuda
This Alien Mefilas is a member of the Dark Four Heavenly Kings and the last one to oppose Ultraman Mebius before Ultraman's intervention put a stop to his diabolical plan. He was killed by his master, Alien Empera for his failure but was temporarily revived as Armored Mefilas (G) (アーマードメフィラス Āmādo Mefirasu Gōsuto).

Despite his similar appearance, voice and mannerism to the first Mefilas from Ultraman, he is said to be an entirely different person in all aspects. Because of this, he is also labelled as Alien Mefilas III (メフィラス星人3代目 Mefirasu Seijin Sandaime) by popular anime critic Ryusuke Hikawa in his written review, authorized by Bandai and Tsuburaya Productions.[1]

At the newly assembled Dark Four Heavenly Kings within Empera's Darkness Fear, Alien Mefilas and two other members were introduced to Yapool as replacement member to their former comrade Ark Bogarl. Mefilas simply allows Yapool to make the first move, followed by Deathrem and Grozam until he was the remaining member left.

Mefilas' actual plan is to send Mebius into despair by brainwashing the Earthlings and Crew GUYS. Despite Ultraman's attempt in intervention, the alien threatens to harm mankind should the veteran warrior gets involved with his scheme. His actions caused Crew GUYS to forget Mirai's existence until the disguised Ultra came in contact with Teppei Kuze. As the two boarded the Gun Winger and about to be shoot by the other brainwashed GUYS members, Teppei managed to free himself from Mefilas' influence. This infuriated the alien into firing the Crew GUYS' aircraft but Mebius' act of shielding them allow the team to regain their senses. To make matters worse, his act of endangering them allows Shin Hayata to interfere and assist Mebius as Ultraman. After a brief aerial fight, Ultraman ordered Mefilas to concede and the alien complied, swearing to defeat the Ultra Warriors in the future.

"Your Highness, does this mean I'm useless to you?! Forgive me!"

―The third Mefilas' last words before his death.

Unfortunately as he teleported to the Earth's outer atmosphere, he was met with a Rezolium Ray from Alien Empera, begging for his forgiveness before being obliterated. Mefilas's Game

As a result of the Mefilas III's own grudge, he was revived and surplus of his negative emotion crafted the armor for him and reviving his fellow members of Dark Four Heavenly Kings (with Giant Yapool as Mebius Killer).

Armored Mefilas fought against the Ultra Brothers and repel their energy beams thanks to his dense armor. Making his way to the Valley of the Flames, he proceeds to obtain the Giga Battlenizer but the heat of the surrounding magma was too much for his armor to handle and was finally burned out. At this moment, his goal was for galactic conquest and has no involvement in reviving the Emperor.

In the Televi Magazine, Mefilas appeared outside of his armor and gained assistance with the Dark Four Heavenly Kings, fighting against the Ultra Brothers and Mechazam. He dons his armor once entering the Valley of the Flames to fight against EX Zetton and claim the Giga Battlenizer until he was defeated again.

"Mechazam! It's your fate to resurrect the Emperor. You cannot escape from this fate!"

Alien Mefilas was revived as Armored Mefilas (G) along with Deathrem, Grozam, and Yapool (in the form of Mebius Killer) thanks to the distortion in the Monster Graveyard. Unfortunately as he was revived as an armored form, the armor he wore turned the originally deceptive and gentleman alien into acting outside of his usual character, appearing desperate for Empera's resurrection and would also resort to dirty tactics.

They held Ace and Taro as hostages for Mebius to claim the Giga Battlenizer. The plan went awry when Hikari feigned his turncoat and this turned the tides of the battle, leaving Mefilas alone after killing Grozam. Mefilas managed to insert the Giga Battlenizer into Mechazam, but was killed by Hikari while his effort was foiled by Mebius. Ultraman Mebius Gaiden: Ghost Rebirth 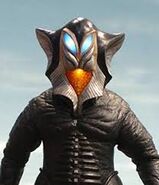