Ultraman Wiki
Register
Don't have an account?
Sign In
Advertisement
in: Articles in need of citation, Ultra Kaiju, Ultraman,
and 35 more
English

"I only wanted the heart of the Earth. But, I have lost. I even lost to a child."

―Alien Mefilas I to Ultraman, "The Forbidden Words"

Alien Mefilas (メフィラス星人 Mefirasu Seijin) is a race of recurring aliens in the Ultraman Series that originate from Planet Mefilas.

Alien Mefilas' name comes from Mephistopheles, the demon from the Faust story.

Alien Mefilas, much like most other aliens of the show, came to Earth to conquer it. Unlike his fellow aliens before him, however, his motive was simply to show off his abilities to the rest of the aliens who had tried to conquer the Earth themselves, such as Kemur and Alien Zarab.

Alien Mefilas's plan was to have a child of the Earth give him the Earth willingly in return for a new star. Hiding in a forest inside his ship, Alien Mefilas spied Shin Hayata, Akiko Fuji, and Akiko's younger brother, Satoru, watching an air show. Alien Mefilas spoke to Satoru, telling him to pay close attention, and then made the air show vanish into the clouds. Hayata and Fuji where baffled, but Satoru was still listening to Alien Mefilas. The alien then put a freighter vessel in place of the air show, then destroyed it in midair. Satoru then told Hayata that someone was talking to him, but before Hayata could do anything, Alien Mefilas captured all three of them.

Alien Mefilas turned Fuji into a giant and placed her in the middle of a city, and tried to convince Satoru to give him the Earth in return for a star, explaining that he wanted to "challenge the heart of an Earthling". But Satoru refused to give Alien Mefilas the Earth. Annoyed, Alien Mefilas put Satoru in his anti-gravity room. Witnessing the man of Mefilas's failure, Hayata (Ultraman) burst out laughing at him. Insulted, Alien Mefilas demanded to know what was so funny, to which Hayata replied that he couldn't convince a child to give up his planet in exchange for a new one because it was inhuman. Alien Mefilas then asked "Ultraman" whether he was an alien or a man. Ultraman simply said "I'm both", he then reached for the Beta Capsule, but Alien Mefilas froze him where he stood.

Alien Mefilas asked Satoru again if he would give him the Earth, but Satoru wouldn't answer. Enraged, Alien Mefilas made the giant Fuji go on a rampage in the city. The SSSP, who had arrived earlier, tried to keep the police from hurting Fuji. Alien Mefilas then made his presence known to them and took away Fuji and replaced her with projections of Alien Baltan, Kemur, and Alien Zarab. Captain Mura demanded that Alien Mefilas show himself, but the alien said he could see them and said he wanted the hearts of the Earth. The SSSP asked what he meant, but heard him arguing with Satoru, who still refused to give into the alien's wishes. Alien Mefilas then turned off his illusions and left the SSSP dumbfounded. However, the conversation gave the SSSP the time they needed to locate Mefilas's spaceship, and an air strike was sent.

With his ship under attack and again with no other option, Alien Mefilas seemed to escape and leave his ship behind, while the Science Patrol rescued Fuji and Satoru. Although they could not rescue Hayata in time, Hayata managed to transform into Ultraman to face off against Alien Mefilas, who emerged from his destroyed ship as a giant. Ultraman offered him a choice to either leave the planet or die like the other aliens. Alien Mefilas refused to leave and went head-to-head with Ultraman in a very evenly matched battle, as all of Alien Mefilas's attacks were strong enough to counter Ultraman's attacks and his physical strength was on par with the hero's. Then shockingly, in the middle of the fight, Alien Mefilas surrendered, seeing no point in continuing. However, before leaving, he promised to Ultraman that they would meet again and he would get his revenge in the future. The Forbidden Words

After the first Alien Mefilas left Earth in Ultraman's time to find a new colony for his species, another member sought to dominate Earth. This Alien Mefilas tried to use a highly advanced bio-weapon called the Mandarin Grass to slowly kill off humans one by one. However after it was destroyed by ZAT, Alien Mefilas revealed himself, and suffers a major injury to his left eye from ZAT's weaponry. He then picks up the Mandarin grass, and wipes it over his damaged eye, restoring it. The second Alien Mefilas now prepared to take matters into his own hands by attacking ZAT directly. Before the situation could get worse, Kotaro turned into Ultraman Taro to do battle. Alien Mefilas was easily tossed around by Taro and after the hero punched a hole through his body, Taro used the Strium Ray, reducing Alien Mefilas into slime, therefore killing it. He's Out! It's Alien Mefilas!

Alien Mefilas appeared again in the 1984 movie, Ultraman Story. He is only shown as stock footage from Ultraman Taro and is the original Alien Meflias from Ultraman as stated in the movie.

After his Re-Eleking was defeated by Ultraman Taro, he decided to attack Earth himself. Ultra Father hears about this and quickly trains Taro to fight of Alien Mefilas' comeback. Once Taro was ready, he headed to Earth and defeated Alien Mefilas only to see there was a bigger threat.

An Alien Mefilas appeared in the final episodes of Ultraman Mebius as a member of Dark Four Heavenly Kings. His major plan is to brainwash the entire townspeople into glorifying him while making Mebius (and possibly the rest of the Ultra Warriors) into their public enemy, therefore sending the young warrior into a severe despair. After Mebius, Ultraman and the rest of Crew GUYS foiled his plans, Mefilas conceded but was killed by Alien Empera out of utter disappointment. Mefilas's Game

At some point prior to Mega Monster Battle: Ultra Galaxy Legends The Movie, he was revived as Armored Mefilas (G) (アーマードメフィラス Āmādo Mefirasu Gōsuto) alongside other members of Dark Four Heavenly Kings to revive Empera using both Mechazam and the Giga Battlenizer. He was shot in the back by Ultraman Hikari and his attempt to revive the emperor was thwarted at the last minute by Mechazam's sacrifice. Ultraman Mebius Gaiden: Ghost Rebirth

In this series, an Alien Mefilas is a Reionics who once wielded a Battlenizer until he was defeated and left for dead by an Alien Temperor prior to certain events in the show. After discovering Armored Darkness's sword, Mefilas is transformed into Armored Mefilas (アーマードメフィラス Āmādo Mefirasu) and thus goes on a killing spree for those who mock him or get in his way, all while being controlled by Armored Darkness's conscience. He kills a Dada that mocked him earlier, and attacks Reimon for standing in his way. He later confronts the Alien Temperor that defeated him earlier for a rematch and winds up killing both and his monster, Arigera. Shortly afterwards, Armored Mefilas revives Armored Darkness to serve "his master", only for Armored Darkness to kill Mefilas and retrieve the sword he had taken away. Armour of Darkness

During the series finale, Armored Mefilas was revived as a giant-sized and mindless slave being controlled by Alien Reiblood. After facing off against Rei's monsters (Gomora and Miclas), Alien Mefilas is eventually freed from both Reiblood's control and the Armor that possessing him. After being transformed back into his normal form, Alien Mefilas frees the Pendragon from an inter-dimensional rift underground created by Reiblood to keep them from contacting Rei out of gratitude to Rei for saving him. Grande's Challenge Planet Destruction

A cameraman for NPTV's documentary program, Mefilas's section was failing and views were dwindling. Their boss, an Alien Chibull, warned them that if things don't change, they will have to face some consequences. Mefilas then got the idea to have his partner Alien Zarab to disguise as a giant Saki Mitsurugi, but their director reprimanded them. They then went around interviewing other people and aliens regarding their thoughts on Saki's plan to turn Earth into a bomb, but yet again the director said that if they don't get the views, the sponsors would pull out and the program would be cancelled. Desperate for a solution, they decide to interview Ushio Minato, who they saw potential in after seeing him on the news. The two then took on human disguises and went to Quattro M to interview him, and disguised as a man named Suzuki (鈴木, Suzuki) to do so. After the interview was over, they went over to Aizen Tech to interview Saki Mitsurugi regarding her plan, asking if she could hurry it up, even though they didn't have much hope that the interview would go well. However, the duo were chased out. They then went back to interviewing other people, this time about Ushio. Coming to the conclusion that an Ultraman's father would have extraordinary abilities, Mefilas decided to set Ushio up. He had Zarab disguise as Asahi Minato and restrained near a bomb and lots of explosives, in a life-or-death game that he thought would really get him the views he needed and was even willing to sacrifice the Zarab, who was unaware that the explosives were real. Katsumi Minato and Isami Minato found out about the plot, and transformed into Ultraman Rosso and Ultraman Blu and after the battle, Mefilas was destroyed by the Triple Origium Beam and Zarab was set free by Ushio. A World Without Tomorrow

Alien Mefilas Gent (メフィラス星人ジェント Mefirasu Seijin Jento) is a participant in the Mega Monster Rush Ultra Frontier and a commander of the Rush Hunters, as well as a member of the Seven Star Swords. 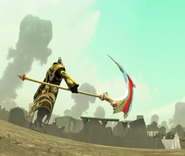 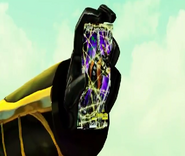 Armored Mefilas (アーマードメフィラス Āmādo Mefirasu) is the transformed state of an Alien Mefilas after fusing himself with the sword of Armored Darkness. This form was intended for Alien Mefilas III, who worked for Alien Empera, however it is also compatible with any individual of the people of Mefilas. 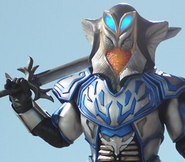 Shock Buster
Ultra King
Ultra King (ウルトラキング Urutora Kingu) is the disguise of an Alien Mefilas that appears in the manga Kagayake Ultra no Hoshi by Mamoru Uchiyama.

The design on the right is a modern recreation of the character by freelance illustrator デスウンコさん (known for illustrating cards for Ultraman Fusion Fight! and other arcade games).[1][2] 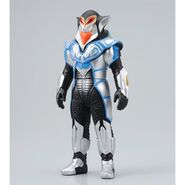 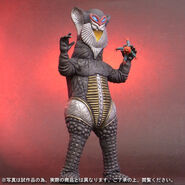 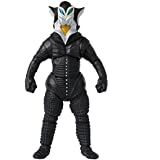 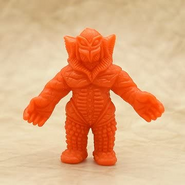