The world behind the mirrors

Ultraman Leo episode 37 "Mystery! The Mirror in Which the Devil Lives"

Long ago, Alien Mazaras lived peacefully with her daughter but one day, her daughter lost her life, turning Alien Mazaras into a merciless kidnapper. She had been kidnapping a lot of children from the Earth. One day while walking out in the human world, she discovered a little girl named Kaoru whom resembled her late daughter. Wanting to cure her sick mind, she disguised herself as the little girl's deceased mother. Her plan was nearing success, had Gen Otori not interfere as she retreated. Gen eventually sensed her as an alien and chased her but she managed to retreat by walking through a nearby mirror. While Kaoru was at her home, Mazaras lured the little girl into the mirror as they played cheerfully. Kaoru's brother, Toru trained himself to be stronger, wishing to save his sister from the mirror world to the point he trained by punching mirrors. Unable to see the boy in such pain, he resort to enter the mirror world. Dan stopped him in the midway, warned Gen about the risk of entering the world. Nonetheless, he disregard his superior's warning and entered Alien Mazaras' world.

Gen found himself in a desert and spotted Kaoru with her "mother". Gen quickly hold them off and pursued Kaoru to return to the real world but she refused. Mazaras called Specter as the monster chased Gen and buried the man in sands. Gen managed to escape and escort Kaoru from the alien impostor. He showed Kaoru the face of her true mother via the girl's locket, finally convincing her. Angered, Alien Mazaras used her hand mirror to burn the locket and summon Specter. The monster chased the two but Gen realized that Specter was being controlled by Mazaras via her hand mirror. He fired the mirror and took possession of it but instead, this made Specter went to the real world and set on a rampage. Kaoru later made her own move by saying that she never needed a mother for her happiness but instead her friends. Alien Mazaras collapsed with a broken heart and transformed into her true form. With Kaoru rendered unconscious, Gen transformed into Ultraman Leo and confront Mazaras while his right hand holding Kaoru. Leo tried his best to evade all of Mazaras' attacks until he used the Ultra Mantle to create a mirror and escaped with it. Mazaras tried to do the same but when she entered the mirror, it cracked upon the Ultra Mantle disappeared and pushed her back, killing her in the process. 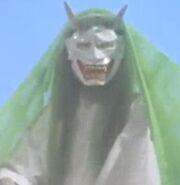