Return of Ultraman episode 33 "The Monster User and the Boy"

New Ultraman Retsuden episode 20 "Mebius and Mates: The Monster Master's Legacy"
Alien Mates (メイツ星人 Meitsu Seijin) are a race of aliens that first appeared in episode 33 of Return of Ultraman.

Coming to Earth to observe the planet's weather and pollution for his species so they could make make a peaceful alliance with the people of Earth. However, after being on Earth for some time Mates was overcome with the amount of pollution and was forced to take the disguise of a human until his strength returned. At the same time the pollution also prevented him from finding his UFO, which contained the kaiju Muruchi if he needed it.

While searching for the UFO by digging holes he adopted a small orphan boy named Yoh and raised him like his own son. Even though they loved each other like family they were bullied by the towns people who feared that they where both aliens intending to conquer the Earth. An angry mob was formed to kill Alien Mates and Yoh, but only for being suspicious. Go defended Alien Mates and Yoh as hard as he could. Then a police officer opened fire and killed the Alien Mates, making his UFO release Muruchi. After Ultraman Jack defeated the biological weapon the Mates species would not return to Earth until the original's son came during Ultraman Mebius' time. The Monster User and the Boy

The true son of the original Alien Mates, who was named Bio (ビオ, Bio), appeared in Ultraman Mebius episode 32 "The Monster Master's Legacy".

Bio came to Earth with the intention of finishing what his father started. As his UFO arrived at Earth, Crew GUYS was alerted to his flight pattern and estimated it would land in the Takuma mountains and were sent in to investigate. On their way there, Bio made his presence known to Mirai Hibino and told and he wanted to speak to him alone. After landing, Ryu Aihara and Mirai split up, and Bio appeared before Mirai he explained he had no intentions of harming anyone and wanted to make peaceful negotiations. He told the story about the first Alien Mates, who was his father and came to observe planet Earth in Ultraman Jack's time on Earth, but was wrongfully killed by cynical humans. He also revealed that he was keeping a dormant Kaiju inside his UFO, a new breed of Muruchi, Zoa Muruchi.

Bio then expressed his grief for his father's death, but then proceeded to make some sort of compromise with Mirai. As they were about to shake hands, Bio was suddenly shot in the arm by Ryu who thought Mates had evil intentions. Bio was outraged, thinking Mirai had set him up, he made a quick escape, out of the forest. He later found higher ground, and had his UFO take flight, and begin attacking the city nearby. Bio assumed a human disguise to watch his UFO cause destruction, and a group of young school children and their teachers who were on a hike in the woods, saw him and offered him their handkerchiefs for his wound, which perplexed him.

Mirai soon turned into Ultraman Mebius to deal with Bio's UFO, and soon after Bio unleashed Zoa Muruchi. While Mebius battled Zoa Muruchi, Ryu stayed with Bio and tried to convince him to call back Zoa Muruchi. Bio refused and reviled that Zoa Muruchi was in tune with his own emotions, killing him would make the Kaiju go into a more ferocious frenzy. Hearing the debate between the two the children's principal came up to Bio and told him about the young boy that his father had adopted, Yoh, who dreamed of going to Planet Mates to finish the negotiations of his father just as he did. Yoh had also inspired her to become a principal, to inspire children to be brave enough to talk to people from far away as well as people from other worlds.

Learning of the legacy his father had left on Earth Bio saw his mistake, but couldn't just forgive what happened to his father. Bio asked Mebius to end his hatred for the people of Earth by destroying the leaning embodiment of his hatred, Zoa Muruchi! Mebius quickly disposed of Zoa Muruchi with his Mebium Shoot. Bio then returned to Planet Mates but promised to return when Earth was ready to meet with the people of Mates. The Monster Master's Legacy 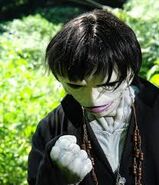 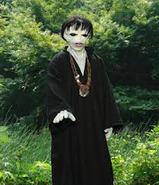 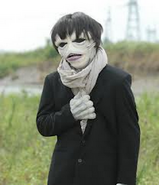 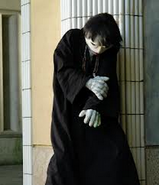