None
Alien Manon (マノン星人 Manon Seijin) are a race of aliens that appeared in the TV series, Ultraman Tiga. They appeared in episode 37.

Alien Manon's motif is based on the appearance of a Kabuki actor/player, their faces even resemble well known type of Kabuki masks.

One month ago, a strange saucer was detected and GUTS had been searching for it since. Tired of searching and that no monsters or aliens had been sighted over a month, General Sawai decided to give them a day off during the spring season. With Daigo and a TPC Staff Officer Nikaido left to manage the Dive Hangar base, the rest of the GUTS members enjoyed their break, while being watched by two mysterious women in kimonos, one a girl and another her maid.

As Yazumi and Munakata tried to contact the base, suddenly the signal was interrupted and the same thing also happened when Daigo and Nikaido tried to contact them. The Staff Officer figured that there's a nearby communication jammer. Similarly, the jamming wave matched the missing saucer that GUTS detected a month prior. Back at GUTS' picnic spot, the similar girl felt sick as Iruma volunteered herself to help her. However, once she dragged the little girl away while accompanied by her maid, they turn the tables and revealed themselves as Alien Manon and kidnapped the Commander. Meanwhile, Rena realised that the two women's picnic spot had vanished followed by Daigo appeared with his GUTS Wing 1 to report about his discovery.

Iruma awoke but found herself in captive as the aliens revealed that they were a race of aliens who were looking to migrate to a different planet as their old home was dying from desertification. The found their new home in the form of Earth, they planned an invasion of the planet by first seizing the Captain Iruma of GUTS, whom was standing in the way of their operation. They torture Iruma in their ship, in an effort to coerce her into revealing GUTS's weaknesses. Before Iruma could reveal anything, Daigo transformed into Ultraman Tiga (after his ship was shot down by the Manons' ship) and managed to board the Manon ship, fighting off the aliens and rescuing Captain Iruma as the ship was set to explode. Despite Tiga's efforts however, one of the Alien Manon survived the ship's explosion and grew to massive proportions to stop Tiga herself. Ultraman Tiga and Alien Manon's battle was long and graceful, matching the very ground they fought on as it was surrounded by cherry blossoms. But in the end Tiga prevailed by firing his Zepellion Ray at Alien Manon, destroying her. Daigo was later allowed to join with rest of the GUTS members for their spring picnic.

Alien Manon was mentioned as a member of Moravia's Phantom Monster Army. 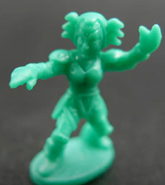