Ultraman Leo episode 1 "The Death of Seven! Tokyo Is Sinking!"

Ultraman Taiga The Movie: New Generation Climax
Alien Magma[1] (マグマ星人 Maguma Seijin)[2] are a cat-like alien race from the planet Magma in Ultraman Leo. The Alien Magmas were a brutal alien race and the ones who were responsible for the destruction of Planet L77.

The one Alien Magma that lead his twin Giras Brothers in destroying Planet L77 set his eyes on conquering the Earth. But Ultraseven who had returned as the protector of the planet stood in his way. Using his bodyguards Giras Brothers, Alien Magma I lead his trio and they brutalized Seven and soon the Ultra Warrior's leg was twisted by Black Giras, breaking it and creating a terrible fracture.

At that moment, Ultraman Leo appeared to assist Seven, seeking revenge against the alien for his home's destruction by their hands. Even with the tides of battle in favor of Magma and the Giras Brothers, Leo and Seven managed to hold off the trio. After being beaten down by Leo, Magma and the Giras Brothers retreated for the time being. The Death of Seven! Tokyo Is Sinking! Sometime after Tokyo is flooded with tidal waves, the Giras Brothers were released again, this time to cause destruction in the flooded city. Ultraman Leo also returned, only to be beaten down by the two Giras Brothers until the Magma Alien returned as well to assist them. With the help of Dan's Ultra Psychokinesis, Leo managed to decapitate the Giras Brothers' heads. With Magma being of little match to Leo's superior martial arts skills, Magma fled the scene, leaving Leo still bitter at the trouble they have caused. The Big Sink! The Last Day of the Japanese Archipelago

Sometime later, another Alien Magma, who is the younger brother of the original, appears, trying to court with a monster named Rolan until he was driven away by Gen (Ultraman Leo's human form). Later after Rolan had taken a human form and befriended several children by creating pinwheels from her feathers, Magma returned, destroying some of her pinwheels until he was chased off again by MAC. However as Rolan tried to return home, Magma attacked and became frustrated by her for not agreeing to marry him, so he then tries to kill her until Ultraman Leo arrived himself to protect the kind monster. Again, Alien Magma was overpowered by Leo's skills and met his end after being impaling through the heart with one of Rolan's pinwheels. Japan Masterpiece Folklore Series - The Monster's Favor

In Andro Melos, a trio of Alien Magmas, known as the Alien Magma Trio (マグマ星人3人衆 Maguma Seijin San-ninshu), were "Battle Aliens" from the Gua Army, the leader of the trio was a cyborg.

The Magma aliens first appeared in Andro Melos episode 1 as the 3 appeared out of the fog and attacked Andro Wolf on Planet S46. The 3 completely dominated Andro Wolf as he was distracted by the Gua Army laughing at him. The Magma Trio stopped attacking the wounded warrior as Wolf was put unconscious by the Gua Army.

The next episode the aliens appear again. As Andro Melos is exploring Planet Nattsu Alpha a Alien Magma hides behind some space rocks and tells the rest of the Magmas that an Andro warrior has arrived. As Andro Melos was completely oblivious the Magma Trio stealthy attacked the warrior. This fight continued onto the next episode as Melos is asked to help Andro Mars on fighting Dachimilan, Melos is still fighting the 3 aliens. Then the 3 say they where the ones that almost killed Andro Wolf so Melos becomes angry but he became trapped by the leader of the 3, Remodeled Alien Magma as Andro Melos was paralyzed!

The next episode begins and Andro Melos broke out of the mace trap and used his Eye Slugger-like weapons. The episode ends as Melos slices two Magma's maces presumming the end for the rein of the 3 alien Magmas.

In this series, an Alien Magma is seen facing off against the Space Swordsman Zamsher on a meteor heading towards Earth. Even after a second Alien Magma comes to aid the first in battle, the two aliens were ultimately killed by Zamsher.

Alien Magma reappeared as one of Ultraman Belial's 100 Monster Army. He was seen teaming up with Alien Babarue, Alien Nackle, and Dada to kill Rei while the Ultras and Rei's monsters fought Ultraman Belial's other monsters, but Rei transformed into Reimon and killed his attackers in short order with Babarue first, followed by Magma, with a kick to the groin and then landing hard with a boom, Nackle and Dada.

In the side story "Friends Left Behind", Magma is stranded on Earth, in possession of the Zetton Spark Doll. Angered that no one paid attention to him and that he was always overlooked by Dark Lugiel, he vents his frustrations on Kenta and Chigusa and almost destroys the Earth with Zetton, but his plans are thwarted by the timely arrival of Ultraman Ginga. In the end, he is reverted to Spark Doll form alongside Zetton as he and Zetton decided to became Ginga's pupil, which the Ultra agreed and fly away with them.

Alien Magma appeared along with Alien Shaplay as mercenaries hired by Gina Spectre who swear their allegiance to as they join Gina in witnessing the arrival of her brother Mold Spectre from another dimension.

Magma was soon tasked along with Shaplay to guard Ultraman Victory's host Sho as he was soon tied up and mouth guarded by Mold. While happily stating that they would take over the universe with the Gua Army, Sho escapes and uses his Victorian abilities to knock down the aliens.

While looking for Sho, Magma and Shaplay came across Arisa and Asuna and fought them while Mold fought Ultraman X and had the upper hand. Magma then decided to change his size and joined Mold in fighting and defeating X until Sho reclaimed his Victory Lancer and fired an EX Red King bullet that distracted them long enough for everyone to escape.

Magma, along with Shaplay, were soon whipped and scolded by Gina for letting Sho get away shortly before joining Mold in standing by for the Gua Army to arrive until Xio arrived and distracted them long enough for Ultramen X and Victory to arrive and Magma, along with Mold, fought them and Magma was losing with Victory launching three Victorium Slashes and blasts from his King Joe Launcher.

An Alien Magma named Maguma appeared as a Villain Guild operative who originally plotted alongside Markind and a few members to lure Young Mother Zandrias into fighting Zegun to demonstrate their monster's strength. Months after disappearing from Hellberus intervention, Maguma returned alongside Markind where they offered their service to EGIS at the height of Woola's crisis and eventually accepted as one of their members.

Alien Magma's Spark Doll was DarkLived by Dark Lugiel before his defeat. He DarkLived his Zetton Spark Doll and battled against the original Ultraman, Tiga, and Ginga in episode 35 of New Ultraman Retsuden. However, he was outmatched by Ginga and was reverted back into a Spark Doll. Afterwards, he requested to be Ginga's pupil and was accepted.

Alien Magma appears alongside Alien Babarue in an episode of Ultra Zone. Magma is working as a waiter, and serves various customers.

Alien Magma reappeared in the puzzle role-playing game for mobile devices, Ultraman Galaxy as a R (Rare) card that you can unlock him in one of the levels in the game with a high chance of getting Magma. 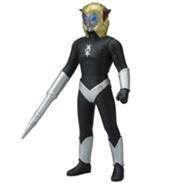 Alien Magma vs. Leo and Astra 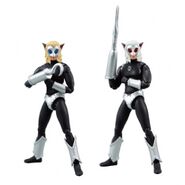 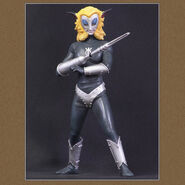 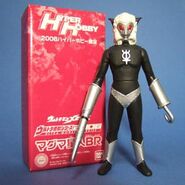 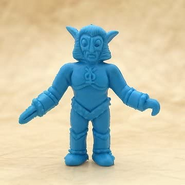 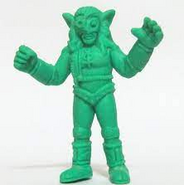