None
Alien Lasesta (ラセスタ星人 Rasesuta Seijin) is an alien that first appeared in Ultraman Dyna episode 20.

The Alien Lasesta were natives of their namesake planet. After it entered a glacial period, they were forced to migrate to other planets across the universe and assume the disguise of whatever species native to their new home world. Two promises were made by the kind: 1) the Lasestas will return to their namesake planet should the glacial period ended and 2) should their planet be destroyed, children at the age of 5 Lasesta years (10 Earth years) will return to their true form and regroup at the rendezvous point (Iris of the Rangifer constellation) to search for a new home planet.

On Earth, a Lasesta family took refuge by posing as the Kishi family, consisting of Satoru Kishi (岸 悟 Kishi Satoru), his unnamed parents and grandfather.

At the time of Planet Lasesta's assimilation with Planet Vividra, Satoru only had his mother as a surviving family member. With his time on Earth grew short, Satoru reveal his true form to his friends, Tacchan and Minocchi. The two still remain acceptable to him and even helped evading detection from Super GUTS. At the night of his departure, Satoru transform into his true form but was mistaken as a threat. Dyna saved him from crashing a power line and reassure Satoru that his future is for the young alien to decide. Satoru managed to grow wings and left the Earth atmosphere before joining his other comrades. 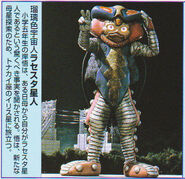