Takeshi Obayashi
Zuckal (ザッカル Zakkaru) is an Alien L85, part of a race of peaceful aliens. Zuckal, along his wife and children, were the only Alien L85 to appear. Zuckal appeared in episode 21 of Ultraman 80 to fight against the monster, Gamos.

Zuckal's race was very much like the Ultramen in that they had a strong sense of justice and often attacked malevolent creatures that bullies other weaker races. Zuckal was a member of a space defense team that will fight for peace, G-Men. However, the unexpected occurs when Gamos an acid spraying Kaiju invaded Zuckal's homeworld, causing widespread catastrophe and furthermore murdered Zuckals' wife and children. Enraged by the incident and unable to accept it to move on with life Zuckal, a once powerful warrior and Ultraman 80's personal ally, sworn a vendetta against Gamos. The one who devastated his world. This drove Zuckal to the point of insanity as despite his warrior skills and his good record of preventing others from evil, he was ultimately unable to save the lives of his relatives.

Unable to make a rational decision because of his arrogance and blind rage he rushed to Earth to settle scores with Gamos and hoping to destroy it, although now biased towards his personal blood feud rather than protecting the people of Earth. His sudden and monstrous appearance gained enemies as he landed, being shot and incapacitated by UGM many times and hurrying to flee. Now in conflict between both humans and Gamos, Zuckal's presence was soon detected by Takeshi whose Ultra instinct realized his friend and once ally was on Earth. 80 attempted to calm Zuckal into making a subtle friendly introduction to humans as to his purpose of visit as well as giving his wounds a chance to recover his shot wounds and a heavy bleeding obtained from his unsuccessful landing, before the confrontation. Zuckal however, held onto the belief that he can do it all alone, attacking Takeshi with heavy blows before running off to the bush. Leaving a saddened and sympathetic Takeshi behind.

As Gamos was sighted. Zuckal's rage got out of control. Ignoring 80's warning that he can't possibly defeat Gamos by himself as a humiliation and bruise to his superiority. Zuckal expanded himself in size and engaged the acidic creature using nothing but bare fists. The 2 monsters gained the attention of UGM who fired at both creatures to Takeshi's dismay. While Gamos suffered no effect from human weaponry the not so resilient Zuckal was heavily wounded by gunfire. The fight soon turned in Gamos' favor as he attacked using his acid spray, coating the helpless monster and gruesomely beat it down. Mortally injured, Yamato transformed into 80, who came to Zuckal's aid in his last minutes. Zuckal still had a spark of arrogance although he confessed that his blind quest for vegeance has now consumed him as he lost his life and his chance to make his family rest. Ultraman 80 however was now furiously motivated by his friend dying in regret and engaged Gamos despite the creature giving him heavy tolls. 80 managed to win and put Gamos to justice.

Though Zuckal didn't survive the climactic fight against the one who had brought devastation to his home world and its people, his sacrifice was not in vain. 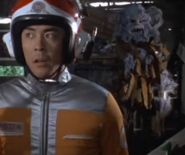 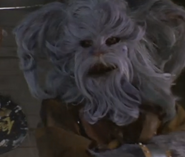 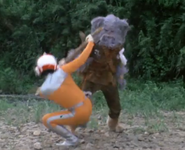 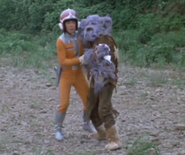 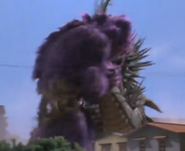 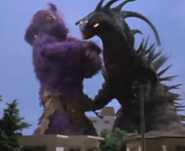 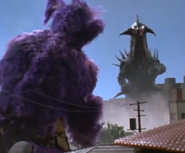 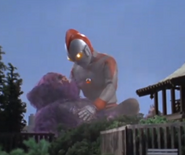 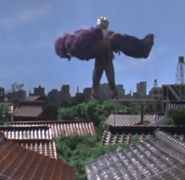 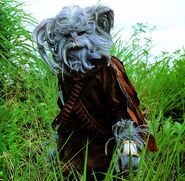