"Please, I need your help."
"My help?"
"Yes, I want the warrior inside your body to destroy me."
"Wait, you can't! Cosmos wouldn't kill any beings without reasons."

None
Alien Kyulia (キュリア星人 Kyuria Seijin) is an alien that appeared in Ultraman Cosmos episode 46.

300 years ago, Kyulia's spaceship crash landed on Earth. Instead of repairing his spaceship, he decided to live as a human named Dr. Yamano. However, flower pollens that appeared from the village due to meteorites that infected the flower had poisoned him, making him becoming a rampant and start to attack the village for a short period and making him a suicidal person. When Team EYES went to investigate the village, Alien Kyulia tells them about his condition while giving Yoshi (Doigaki's lover) a refuge after she suffering an amnesia. Kyulia also begs Musashi/Cosmos to kill him as he didn't want to rampaging again due to the kindness of the villagers but Musashi refuses, particulary that Cosmos' power are not made for destroying.

After Alien Kyulia rampages again Musashi transforms into Cosmos and use the Eclipse Mode to remove the poisonous flower pollens from his body and the whole flowers from the village. Kyulia thanks Musashi and resumes his life as a normal human. 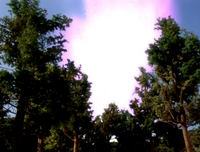 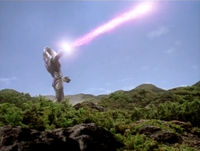 Human Disguise
Add a photo to this gallery
Retrieved from "https://ultra.fandom.com/wiki/Alien_Kyulia?oldid=510041"
Community content is available under CC-BY-SA unless otherwise noted.