Alien Kisaragi (きさらぎ星人 Kisaragi Seijin) was an alien with ability to turn into the monster Onibanba (オニバンバ, Onibanba). She first appeared in Ultraman Taro.

Alien Kisaragi first appeared on the top of a temple. ZAT believes that she is an actual oni so ZAT sends Kityama to kill the "monster". So on the first day of Spring, Kityama and other join in on the ghost hunting, as everyone but Kityama and Kotaro are doing it for the tradition of throwing beams to scare the demons away. Alien Kisaragi suffers from the beams and gets angered that humans aren't friendly to her race and then she notices that Ultraman Taro is siding with the humans as well. Using her magic, she summons two bags of beans for Ichiro and Jiro, friends of ZAT, and encourages them to eat them. After showing her true form, she uses her powers to cast a spell on Kotaro Higashi. Later on, she emerged from a lake, and shows herself in front of Jiro telling him that she will make Ultraman Taro suffer. Afterwards, she grows giant and turns into the monster Onibanba.

Onibanba then goes on a rampage and tries to find Kotaro and Ichiro. Then Kisaragi as Onibanba captures the two and after a humorous attempt, Onibanba traps them in a bean terrorizing Jiro, After trapping them in a bean, Onibanba reverts back to her alien form's human disguise so she can watch Jiro eat Kotaro and Ichiro, who are stuck inside of the bean. They managed to escape from the kid's clutches and Jiro recognized the witch as the alien. Enraged, she turned into her alien self and unleashed her fury on ZAT before turning back into her monster form. After suffering a small setback from a member of ZAT, she goes after Ichiro, who hides in a construction zone pipe before being found by Kotaro Higashi. After laying waste to the construction site, Onibanda minimizes the two victims and traps them into a bean. She manages to catch the bean, after it proved rather tricky for her, and spends the time squeezing it, kicking it around like a soccer ball, and squishing and crushing it until it becomes the size of a regular bean so that Jiro may mistake it for a bean and eat it.

When Alien Kisaragi became enraged after Jiro refused to eat the bean his brother was in and recognized her as the alien, she turned back into Onibanba but was suffering from the holy beans the kid threw at her. After escaping from being trapped in the bean, Kotaro used his Ultra Badge to transform himself into Ultraman Taro and saved himself and Ichiro. Afterwards, Taro proceeded to fight Onibaba and, at the start, took his spiked club and used it against him, then threw it away and resorted to using close combat at the monster's face. Onibanba then started to level up to Taro's level after he got distracted by the boy and his friend's cheering, but nonetheless, Taro stood his ground against her. After hearing Taro put in some holy beans in a building, Onibanba became horrified as she was shunned by everyone, including Taro, who began hurling the beans towards her.

With Taro now the clear victor, Onibanba vowed to get her revenge one day and stated that she would return the following year, then took to the air, but before she could escape, Taro threw her club into the air, which collided with her head, giving her a headache as she fled into space. 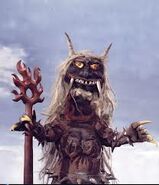 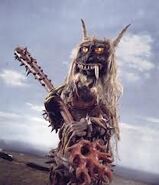 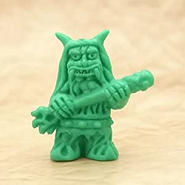