Alien Kettle (ケットル星人 Kettoru Seijin) was an alien that first appeared in episode 11 of Ultraman Leo.

An alien invader from another world, Kettle quickly was on the offensive and attacked MAC. His skills in martial arts defeated the team and then a Japanese wrestler, Mighty Matsumoto tried to fight the alien but died of his injuries. They found him again, this time in the woods, and it again thwarted the group, not even Gen could take him down. With Ichiro Matsumoto's uncle killed, Ichiro then saw his aunt get killed by the Alien Kettle. Gen became really sorry for the kid's family deaths so he and Ichiro began training even harder and Gen realized that Kettle's weakness is falling so in their next battle, Gen threw Kettle off a mountain making Kettle unable to win. Instead of running, however, the invader transformed into a huge monster, not knowing Gen was actually Ultraman Leo. As soon as Kettle transformed into a towering monster, it began to try and kill Gen. Gen fought back, firing his gun at the creature with no effect. Normal weapons failing, Gen turned into Ultraman Leo to attack the beast. In order to counter the giant’s staff, the hero converted two large smoke stacks into Leo Nunchaku and began his attack. The martial arts weapon, however, was quickly destroyed by the invader’s blade. When it looked like he had defeated Leo, Giant Kettle made the foolish mistake of throwing his staff at the warrior. Leo effortlessly leaped over it, allowing it to smash into a building where it was effectively destroyed. Having to use his own battle skills against the hero, Giant Kettle was no match, even as Leo’s timer began to flash. His life was soon ended by a hit from the giant’s Leo Kick, an attack which made it explode.

Alongside a host of other lesser-known monsters, aliens and machines, Alien Kettle is due to reappear in this series and battle Sevenger. 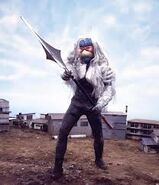 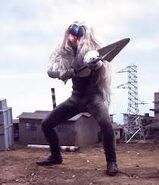 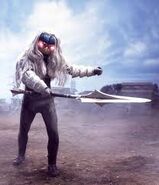 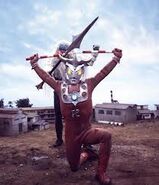 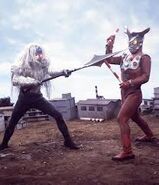 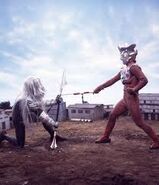 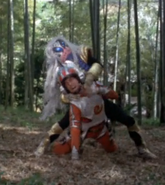 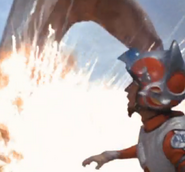 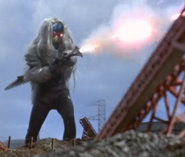 Alien Kettle in a stage show 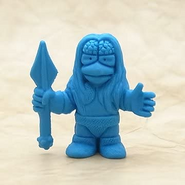