Ultraman Taiga The Movie: New Generation Climax
Alien Keel (キール星人 Kīru Seijin)[1] are a race of aliens that are first mentioned in episode 21 of the TV series, Ultra Q, but made their physical appearance in Ultra Galaxy as Vittorio in game and manga, and Grande in live-action.

Alien Keel's name is based on the English word kill.

Although despite not appearing physically in the series, the Alien Keel (according to Alien Ruperts) are described as being a belligerent and barbaric race of aliens that thrive on war and hatred. They had already ravaged the home planet of the Alien Ruperts and had planned to assault Earth with their weapon, the stingray monster Bostang. Fortunately, their plan failed when Bostang was killed by Japan's SDF, and the Alien Keel were never mentioned again. Space Directive M774

Alien Keel re-appears in Ultraman Taiga as a member of the Villain Guild. He and his partner Hupnath were sent to retrieve a Majappa, which was sealed inside a device by Maiko Namekata. He brawled with Homare Soya, but was eventually defeated. The Present for Each 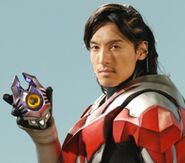