While on patrol, ZAT member Kotaro Higashi noticed Alien Katan driving a car in District A 16, resulting in a high speed car chase. Ending after going in a circle, the alien crashed his car while also hitting a young girl named Machiko. Alien Katan jumped into the girls body to hide from ZAT, who quickly sent Machiko to a hospital when Kotaro found her body near the wreckage.

The doctors that looked over the young girl noticed how little she seemed to have been injured. Kotaro decided to stay with Machiko, and she asked him to buy her a doll of Ultraseven. But when Kotaro was returning with the doll in hand, Alien Katan reappeared in another car and started to chase Kotaro until he over the man's arm. These events lead ZAT to believe that the alien was targeting their members, and Captain Yutaroh Ashina ordered all members to be on alert.

Kotaro return to Machiko, but found that the Seven doll that he had bought for her had been cut to pieces. Machiko stated that she had no knowledge of how the doll was destroyed, and asked for another doll, this time of Ultraman Ace.

Kotaro agreed and was again attacked by the alien from Katan by having construction material fall on him, resulting in Kotaro's limbs being paralyzed. Alien Katan, while in Machiko's body, appeared over Kotaro's unconscious body with a knife in hand, but quickly retreated when a ZAT patrol car arrived.

Kotaro was found by Captain Yutaroh, and member Izumi Moriyama who took him to the same hospital as Machiko. Captain Asahina stayed with Kotaro while Izumi went to check on Machiko. When Kotaro awoke Asahina offered to deliver the doll that Kotaro had protected from Alien Katan's previous attack. However when Yutaroh arrived at Machiko's room he found the door ajar and Izumi knocked out. Alien Katan appeared to Kotaro again in Machiko's body, and mockingly asked Kotaro to give her(him) the world, causing Kotaro to realize the aliens identity. Yutaroh and Izumi then arrived, but Alien Katan, now separated from Machiko, took the girl and slyly ordered ZAT to drop their weapons at let him escape. Kotaro jumped on to Katan, giving Yutaroh an opening to shoot the alien out of the hospital window.

Alien Katan then grew large and started to attack the city with his flames. ZAT tired to stop him, but their efforts ineffective. Kotaro had Izuma take Machiko to safety while he searched for the Ultra Badge and then transformed into Ultraman Taro. The Ultra Warrior engaged Alien Katan in battle, but the alien's powers proved to also be trouble for Taro himself. Alien Katan blinded Taro with his eye beam leaving Taro helpless. Seeing Taro situation Captain Yutaroh ordered the ZAT fighter planes to execute their "Bell Strategy" to assist Taro. The ZAT fighters manage to attach a giants bell collar to Alien Zatan's neck, allowing Taro to know the alien's location. Ultraman Taro finally destroyed Katan with his ultimate special attack, Ultra Dynamite.

Alien Katan was mentioned in episode 36 by the narrator for blinding Ultraman Taro. These events are only a few hours before when Grost attacked. 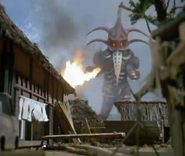 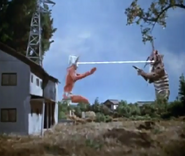 Figure of Alien Katan by X-Plus 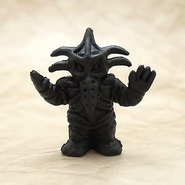 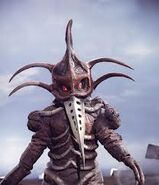 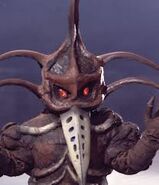 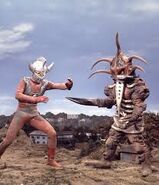