Ultraman Leo episode 6 "You're a Man! Burn On!"

None
Alien Karly (カーリー星人 Kārī Seijin) is an alien that appears in the TV series, Ultraman Leo. He appeared in episode 6.

Arriving on Earth with unknown intentions, Karly began to attack humans until M.A.C got involved one of them was Officer Shatori's girlfriend. It transformed itself into a towering beast right before Gen’s eyes. After defeating Ultraman Leo, Karly returned to his normal size and continued its crazy antics as before, once again, turning into a giant and wrecking the city.

After being discovered by Gen, Karly transformed into a towering monster and began its attack. Ultraman Leo was again summoned into action, but Karly virtually dominated him in battle. After throwing the red giant around, Leo was forced into retreat and Karly reverted to his smaller size and continued on with his villainous antics. Again, however, the alien would summon his giant form and began to attack. However, Gen had been training. Alien Karly had to pull out all of his tricks in order to fight back, but even that wasn’t enough. Leo ripped off his blades and drove one of them through its skull, killing Karly instantly.

Figure of Alien Karly, by Bullmark. 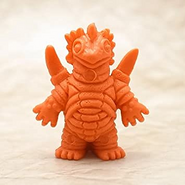 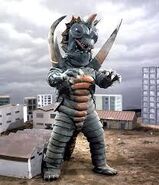 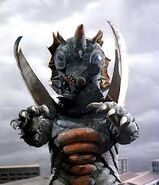 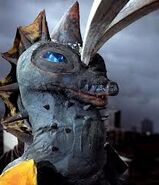 Alien Karly with his Spikes in his Face 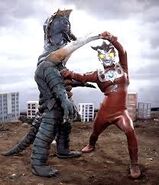 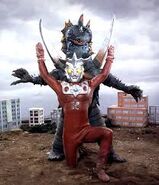 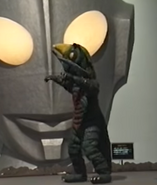