This may not be the article you are looking for. For the alien with a similar name in Ultraman Orb THE ORIGIN SAGA, see Alien Kanon.

"Look, an Earth Defense Force aircraft patrol unit is approaching!"
"The Arctic is our territory. Nobody is supposed to set foot on it!"

Ultraseven episode 24 "Return to the North!"

None
Alien Kanan (カナン星人 Kanan Seijin) was an alien that appeared in Ultraseven episode 24.

After a bizarre plane crash in the arctic the UG went to investigate the matter. As they sent one of their fighters to investigate Alien Kanan used their lighthouse-like base to create an aurora and took control of an airliner. Shigeru Furuhashi who rode the UG plane was also stuck flying to a airline plane, but Dan was sent to help the situation. Alien Kanan used lasers to scare Dan off, but it did not work and the hero continued moving towards them. From that point Dan went on foot and used Windom against the Alien Kanan's base, but before any damage could be done the capsule monster was hit with the hypnosis beam and was sent against Dan, who then turned into Ultraseven. After tiring out Windom, Ultraseven used the Emerium Beam to break the hypnosis and sent him against Alien Kanan once more. Windom was forced back into his capsule after being hit with Alien Kanan's stun ray. Just then Alien Kanan launched his base like a rocket trying to escape to outer space, but Ultraseven followed them and destroyed the base with a single blast of the Wide Shot. Furuhashi luckily dodged the crash as Kanan's powers where gone. 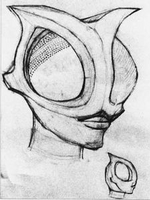