None
Alien Jaki (ジャキ星人 Jaki Seijin) are a race of aliens from the Dark City. An individual member of the race, Arlon (アーロン Āron) appears in Ultraman Geed The Movie: Connect the Wishes!.

Arlon, a member of the Jaki race, uses inside intelligence to transmit information to the heroes of the film.

He is sought out by the heroes so that they could learn more about the Red Steel but when they reach him, he asks for payment. Moa Aizaki was ordered to pay him, but for some reason, her purse was not with her. Zenna instead got Leito Igaguri to do it instead, reluctantly. The alien kept demanding money after every sentence he said, so Laiha Toba had enough and forced him to tell them everything he knows by pointing the tip of her sword at him.

Alien Jaki being beaten up and coin stolen by Laiha 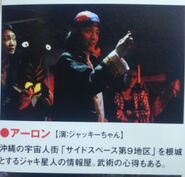