ULTRAMAN (2011 manga) Chapter 31
ULTRAMAN (2019 anime) episode 8 "The Beginning of Truth"
An alien living on Earth, Alien Igaru (イガル星人 Igaru Seijin) is a disturbed fan of Rena Sayama and possibly connected to a series of murders. In the manga, his real name is later revealed to be Pigmon (ピグモン Pigumon).

Igaru was from royalty before coming to earth, and was even the representative to the Star Cluster Council Alliance for his people. His people were peaceful and because of that they were exploited politically and then wiped out. Pigmon was representing his people to the Star Cluster Council when the genocide took place and was given permission to relocate to Earth where he was given a place to stay by the (presumably) SSSP in the Alien City. There he took on a more humanoid form. However, he was a shut in and besides his rations of ramen bowls, his only interactions with the outside was mainly through the internet where he learned of Rena Sayama. It was through this that he made three human friends (He wore his disguise of a wig and mask).

Later on, he became an avid if not disturbed fan of the idol Rena, getting upset to the point of childish raving and drooling when someone spoke ill of Rena on one of the internet chatrooms it visited. When Kurata and Yosuke Endo were checking out the home of a recent victim of a string of strange murders he ran when the detectives called out to him. The alien proved to be faster than a normal human, and more durable as well as it was hit by a car and knocked out for a little while. When Endo saw its face it awoke and took off before either policemen could do anything.

After Shinjiro's battle the same alien spied on Endo and Rena from outside the hospital. Later while Shinjiro and Moroboshi were in the city he was seen in his room being contacted via cell phone while watching Rena on TV. The news clearly was unpleasant.

At Rena's concert, when Agent Adad appeared and attacked, the event caused Shinjiro and Moroboshi to appear in the Ultraman. When Adad threatened Rena, Pigmon appeared in his true form to protect her. However, this was the true goal of Adad, who went on to reveal that Pigmon was partially responsible for the string of murders, due to being coerced by his 'friends'. Outed as a murderer, Pigmon's throat was slit by Adad, and died on stage in front of Rena as Shinjiro tried to revive him.

Alien Igaru is the last of his kind, the prince of his planet before it was destroyed. He eventually made his way to Earth to live. Igaru became obsessed with Rena Sayama, and was coerced by his friends to start a string of murders against anyone who talked bad of her. While peeping on Yosuke Endo and Kurata investigating a murder, he was spotted, and ran away. Unfortunately, he was run over by a car, and Endo tried to get him up. It was then that Endo noticed that he was an alien, before Igaru managed to get away once again. City of Aliens Falling for Endo and Yosuke's trap, which was to badmouth Rena in an abandoned flat to ambush him, he sent Alien Bris as usual, surprising the cops. The Curse of Ultraman Igaru is later robbed of his communicator by Agent Adad, and is also beaten up. He runs over to Rena's concert, but gets ambushed by Endo and Kurata along the way, and tells them that Rena is in danger. Hidden Thoughts Igaru and the two cops then rushed over to see two Ultramen, Adad, and Bemular fighting. Initially staying hidden, Igaru jumped in front of Rena when Adad threatened to kill her. In a futile attempt to protect his idol, Igaru attacked Adad but had his neck slit, and died on stage. After his death, Adad exposed the truth behind the murders as well as calling out Igaru's friends as the ones truly responsible for the killings. The Beginning of Truth 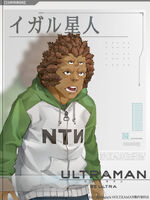 Alien Igaru in ULTRAMAN: BE ULTRA
Add a photo to this gallery

Retrieved from "https://ultra.fandom.com/wiki/Alien_Igaru?oldid=514258"
Community content is available under CC-BY-SA unless otherwise noted.