"Yes. Reionics from all over the universe have gathered here, and here is where they will fight. This is an arena for the Reionics' battle."
"Reionics' battle?!"
"A battle among those with Reionics blood to determine who will be their heir and rule the cosmos. You came here for that, too!"

Ultraseven episode 47 "Who are You?"

Ultraman Taiga episode 18 "For the New World"
Alien Hook (フック星人 Fukku Seijin) are a race of aliens from the planet Hook originally featured in the 1967 Tokusatsu TV series, Ultraseven. Alien Hook first appeared in episode 47 of the aforementioned series.

Another of the vast number of evil aliens seeking to conquer the planet Earth during the First Age of Aliens, Alien Hook first made themselves known to a man who’d seemed to be drunk, alienating him from everyone around him before he suddenly returned to normal, unaware of what happened. watching the man from a nearby ally. Several Hook confronted the man as he tried to call the Ultra Guard to the threat. While the others didn't believe his pleas, Dan listened and decided to investigate after convincing the others when the man’s call ended abruptly as the Hook took the man to silence him. They showed the recording to those at the apartment, who were now worried for the man, who was now missing. As Dan walked around the phone, he felt something was wrong and this was far more than just a prank call. The UG chose to investigate, Dan and one of his teammates going undercover. Dan used his Ultra abilities to see something was unusual about a nearby housing complex, seeing they’d somehow been sucked underground and put back up somehow. But before they could investigate further, the Hook aliens attacked. Disguised at humans, one attempted to throw a large steel girder to crush them, only to be shot and killed.

More attacked, the two combat trained Garrison Members soon beat them back. Dan investigated further, seeing through a door and detecting the aliens within their disguises inside. As it turned out, the entire complex had been replaced by the invaders and the two found themselves in a dangerous situation. Dan lead them underground, following a strange noise and soon finding themselves in a vast underground area where all the apartment buildings really were, the ones on the surface were a base used by the Alien Hook invasion. After throwing a device into the complex, the two decided to return to the surface to alert the rest of the Ultra Guard but Dan heard the strange noise again, opening a hidden door to find the man who’d been captured by the Hook previously before freeing them, only to be confronted by an Alien Hook disguised as his wife, then other Hook coming to confront them. The Hook then revealed how they were using the buildings and underground base as a launching pad for their invasion of the planet Earth. The aliens began to launch their spores before shedding their disguises to confront the humans. While their gas pistols knocked out the humans, Dan was unaffected and transformed into Ultraseven, rescuing his friends. Outside, three of the aliens confronted the hero in giant size but his skills were greater, throwing them around with ease. However, the aliens crafts continued launching, but the Ultra Guard arrived to deal with them, only to be effected by their illusion powers, thankfully, together they began to overcome them. The Hook meanwhile began using their illusionary powers on Ultraseven to stun him, only for the hero to use his Body Spark to reverse it and stun them in return. Then, with one blast of the Three Wide Shot vaporized all three of them while the Ultra Guard dealt with their spores, ending the invasion and saving the humans in the apartment complex. Who are You?

Another Alien Hook appeared in Ultra Galaxy Mega Monster Battle: Never Ending Odyssey episode 2 as one of the Reionics.

Alien Hook was one of the various aliens who wielded a Battlenizer. Alien Hook in particular used two Dorakos. His first Dorako attacked Rei and the ZAP Spacy ship. Rei quickly summoned Eleking to do battle with Dorako. Dorako proved the more agile of the two, and viciously attacked Eleking with his hooks and was overpowering the aquatic monster. However, the tides were turned when Dorako was wounded and distracted by a volley of Spacium Missiles fired from the ZAP SPACY ship. Eleking then beat Dorako to the ground and tore off his foe's wings. After further assaulting Dorako, Eleking finished the flying monster off with a blast from its electric beam, causing Dorako to fall over and explode. Seeing his monster defeated, Alien Hook quickly fled from the scene. However, Rei spotted him and gave chase, and quickly caught up with the alien, and quickly caught up with the dog-like creature and pinned him against a rock. However, Alien Hook pleaded for mercy, prompting Rei to let go. Seeing this opportunity, Alien Hook teleported away, leaving Rei in a rage. Later, Alien Hook challenged Alien Zetton to a battle, with Alien Hook summoning a Re-Dorako (possibly the same individual he had) and Alien Zetton summoned Telesdon. They were evenly matched, but the battle was suddenly interrupted by King Joe Black's arrival. The robot blasted and destroyed both Telesdon and Dorako with ease. Before the two aliens could retreat, the robot's master, Harlan, an Alien Pedan who sought to destroy all who wielded Battlenizers, shot and killed Alien Zetton. When the Reionics hunter pointed her blaster at Alien Hook, he dropped his Battlenizer and begged Harlan to spare him. As Harlan lowered her weapon, Alien Hook threw a knife at the hunter, only for Harlan to dodge and shoot, killing him. 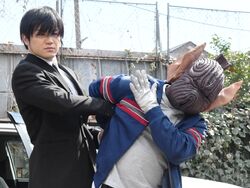 Alien Hook appeared in episode 4 of Ultraman Geed. He was visited by Moa Aizaki of an unnamed insurance company, who is actually part of AIB. She spotted a plant she recognized as Lugus, cultivation which of said plant was banned by law. He exposed his true face while trying to run from Moa until running into her partner Zena who engaged him in a fist fight. After the short fight, the two members arrested Hook, and took him to AIB Headquarters. The alien was deported from Earth as punishment not too long after.

Alien Hook appeared in episode 7 of Ultraman Taiga, as an accomplice of an Alien Babarue. Both planned to awaken the ancient demon, Night Fang, from its slumber. He disguised as a villager to go undercover, but he and Babarue took off their disguises later on to reveal their true nature. Homare Soya quickly dealt with the Hook. To the Demon's Mountain!!

Later, another Hook, seeking to overthrow humanity, had partnered with Alien Bat Seiji Komori. He manipulated a Bemular to come to Earth, with Ultraman Titas and Ultraman Fuma having to defeat it. He was seen on Seiji Komori's TV, communicating with him about their plans to overthrow the humans. The alien's speech was cut short as Homare came in, surprising Seiji as he shut off the TV. For the New World 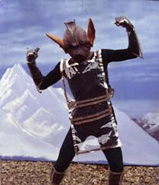 Alien Hook in the stage show. 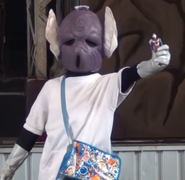 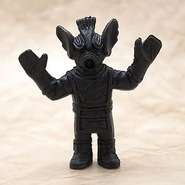