After Yapool was defeated by Ultraman Ace, he went to recover in his own dimension. Alien Hipporit took advantage of the relative calm, and traveled to Earth to kill Ace and the other Ultra Brothers. Hipporit first appeared in a city, calling out to Ace to demonstrate his power to the Ultra by decapitating a giant statue of Ace before teleporting away. TAC soon found Hipporit in a remote area of the Japanese countryside and attacked him, but TAC's fighters were easily downed by Hipporit's strength. Eventually, Ultraman Ace appeared on the scene.

During the fight, Ultraman Ace and Hipporit were roughly matched in strength until Hipporit trapped Ace inside a glass chamber that appeared out of nowhere, where Ace was doused in an unusual liquid and gas inside the chamber. Then to everyone's shock, after a few seconds the chamber disappeared to reveal that Ace turned into a giant statue composed of bronze, but not before sending an Ultra Sign to the other Ultra Brothers (Ultraman, Zoffy, Ultraseven, and Ultraman Jack) who rushed to the scene. Shortly after discovering the bronzed statue of Ace, Hipporit appeared and trapped Ultraman and Zoffy into the glass chambers before they could even attack. Seven and Jack rolled away in time, with the former fighting Hipporit but overpowered by his strength. Jack was trapped in a chamber after attempting to use his bracelet to free his brothers, leaving Seven alone. The alien overpowered the hero and trapped him in a statue chamber, thus turning all the Ultra Brothers into statues of bronze. Total Annihilation! The Five Ultra Brothers

With the Ultra Brothers now incapacitated, TAC were the only ones left to stop Hipporit's world conquest, and mounted an attack, provoking the Alien into stepping out of one of the chambers he had been using as a shield. However, the team was unable to injure Hipporit in any capacity, and they soon found themselves surrounded in a ring of fire created by the alien. Suddenly, a large, green energy ball fell from the sky and attacked Hipporit. It was revealed to be none other than Father of Ultra, Ace's adoptive father.

Proceeding first by rescuing TAC and freeing the still-lifeless Ace from his bronze coating with the Ultra Shower, Father of Ultra seemed to have Hipporit on the back foot, firing his Crescent Shot at Hipporit, then utilising his Ultra Array to issue flashes of blinding light that floored the alien. Father of Ultra continued to fight Hipporito with powerful punches, throws and kicks, until the alien suddenly regained the upper hand through use of his Twin Belly Lasers, severely injuring and weakening Father of Ultra. Suddenly, Father of Ultra tore out his Color Timer, which dispensed its energy to Ultraman Ace, reviving his adopted son, but this also meant that Father of Ultra had sacrificed himself, and the noble hero collapsed, dead.

After King Pandon was destroyed by Ultraman Mebius, a glass chamber suddenly formed around Mebius and he was doused in an unusual liquid and gas inside the chamber, which quickly transformed Mebius into a Bronze statue that was left on the harbor where he beat King Pandon. A dark cloud then emerged from the sky forming into Super Alien Hipporit, the leader of the invasion of monsters. Super Alien Hipporit warned humanity of their destruction now with Mebius defeated and that there is no hope left for the people of Earth. The alien then vanished into thin air, but not before unleashing two more monsters upon humanity: King Silvergon and King Goldras.

Later that night as his monsters were continuing their path of destruction, Super Alien Hipporit returned to join them in the destruction, continuing his goading to the humans of their destruction. Still with hope inside of him, Daigo transforms to Ultraman Tiga to confront the three monsters. However despite Tiga's strength over King Silvergon and King Goldras, Super Alien Hipporit assaulted Tiga himself and the hero was over powered by the three monsters. Then just as Hipporit tried to transform Tiga into a bronze statue like Ultraman Mebius. However, Asuka and Gamu appeared and transform to Ultraman Dyna and Ultraman Gaia respectively, saving Tiga. Now three on three, the odds were now evened and Super Alien Hipporit fought Tiga by himself. Super Alien Hipporit was no match for Ultraman Tiga and was ultimately destroyed by the Zepellion Ray. After his defeat, he and the other defeated monsters combined into Giga Khimaira. It was defeated by the Super 8 Ultra Brothers.

Alien Super Hipporit was one of Ultraman Belial's 100 Monster Army. He teamed up with Alien Temperor, Telesdon, Arstron, and Zoa Muruchi to take on Gomora. Hipporit, as well as the rest of the surviving monstes was then called back by Belial to watch Reionic Burst Gomora fight the Ultras. When Ultraman Zero arrived, Hipporit teamed up with the remaining monsters to take Zero down. He was gonna attack Zero but he got kicked at the back. He was the last monster killed by Zero's Zero Sluggers, behind Arstron, King Pandon, Verokron, and Sadola. Mega Monster Battle: Ultra Galaxy Legends The Movie

A regular Alien Hipporit is seen along with many different monsters cheering Ultraman Ginga on as he fights Dark Galberos. The Closed World

He can also be seen in a couple of shots in later episodes as part of Dark Lugiel's collection along with Mochiron, Gan-Q, Alien Babarue, Mecha Baltan, Goldras, Birdon, Dada, Ace Killer, Deathfacer, Gatanothor, Twin Tail, Ghighi, and a lot of other monsters and aliens. It is likely that he returned to space in his original form after Ultraman Ginga defeated the darkness that turned Hipporit into a Spark Doll.

An Alien Hipporit appeared in the movie under the name Callisto (カリスト Karisuto), summoned by Murnau via the Dark Ring alongside Alien Guts Doppel and Alien Temperor Batista as part of her Dark Alien Army to finish off Ultraman Orb, who was about to be finished by Alien Gapiya Sadis at the time. The three of them unleashed their signature attacks on the Ultra, with Callisto's being his lasers, knocking him down in the process and leaving him wide open for the three of them to capture Orb for Murnau and transported away, leaving Sadis frustrated.

He was later ordered by Murnau to help out Darebolic alongside Temperor and later grew giant together and fought against Ultraman Orb in his new Orb Trinity, who effortlessly defeated Sadis, until Zeppandon showed up to give the Ultra a hand. Callisto took on the fusion Kaiju alongside Temperor and while they had trouble with him at first, but later on, the Kaiju ran out of fire and found himself at the mercy of Temperor and Hipporit as they beat them up and defeated him with their flames and lasers respectively, forcing Zeppandon to revert back to Jugglus Juggler's human form, and then joined Darebolic in ganging up and beating up Orb alongside Temperor.

Just as things seemed bleak, Jugglus used his powers to cast away the Dark Ring, which resulted in the Ultra Warriors, Ginga, Victory, and X being freed from being space jewels after they unleashed energy blasts at the trio. After being joined by Guts, the alien army launched their attacks on the Ultras, who deflected and dodged the attacks and Callisto ended up fighting Ultraman Victory alongside Temperor, who chose to fight Ultraman Ginga. During their fight, the Hipporit unleashed his signature laser attack on Victory, but the latter jumped up to dodge it and then counterattacked with a Victorium Slash. Later on, the alien duo decided to end their fight when Victory and Ginga summoned the Shepherdon Saber and Ginga Spark respectively and launched their combined attack against the Ultras' Ginga Victory Ultimatum, but the latter won the beam struggle in the end, resulting in the two aliens being destroyed, and ending their service to Murnau. Ultraman Orb The Movie: Let Me Borrow the Power of Bonds!

An Alien Hipportio, along with an Alien Temperor and Kyrieloid, was one of the second team of aliens trying to take down Dinosaur Tank. Even after a combination of Hipporit's antenna beams, Temperor's electric beams, and Kyrieloid's fireballs, Dinosaur Tank was still unfazed. The Kaiju finished them off by firing his cannons at them, making them dizzy, and then squashed them like bugs with his right arm. 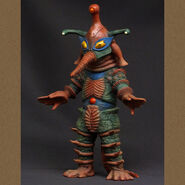 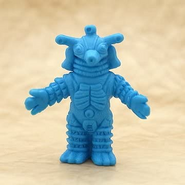 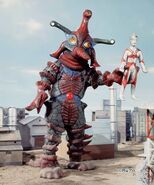 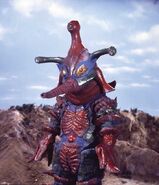 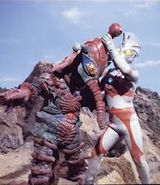 Jatar as member of Darkness Five

Jather disguised as Mother of Ultra

Ultraman Zero reveals that he was always on to Jather's trick

Jather reveals himself to Zero

Jatar about to turn Zero and Glenfire into bronze

Alien Hipporit Spark doll on the corner of the top shelf 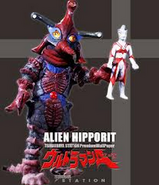 Hipporit in an Ultra Zone sketch 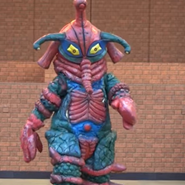 Alien Hipporit in a stage show