A powerful ape like alien from a distant star, Alien Goron decided to enslave all of man with his mind controlling technology. As a demonstration of his power, he turned a man named Gorry into an ape with his technology. One day, Gorry went out one night to steal some chickens until, two police officers tried to stop him. Then, he became an ape and knocked out the officers. The UG decided to investigate. They found blood at the scene of the attack. After doing some examining, they found out it was human blood! Dan Moroboshi and Anne Yuri went to a monkey research center for more information. As Anne went to talk to some of the scientists (possessed by Alien Goron) Dan took a look at some of the monkeys. He came upon one and said in his mind that he detected higher intelligence. As they looked around, they realized they were being spied. Dan had a plan that they will pretend to leave  then, they go around and see what they're up to. Then, Gorry secretly sabotaged their car so, they couldn't leave! As Dan tried to fix his car, Gorry ambushed him. After a lot of powerful hits, Dan was knocked out. As Anne was still exploring, she was attacked by the scientist that planned to turn Anne into a primate! As Anne was about to be a turned, Gorry broke free from the chains that were holding him back. Gorry wrestled down one of the scientist as Anne tried to escape. As Gorry approached Anne and carried her outside, Dan forced Gorryto retreat by attacking him. Dan and Anne were reunited. Anne decided to go on a raft back to H.Q. until Gorry was on the boat and was finally killed by the other Ultra Guard members. While Dan was still investigating, Alien Goron revealed his plan to turn man back into a primate. With no other option, Dan became Ultraseven. Ultraseven was about to attack but, Goron disappeared! Ultraseven threw his Eye Slugger high into the air as Goron was hit hard. As Ultraseven charged at the powerful ape, Alien Goron shot his eye beams. Ultraseven became dizzy and was knocked out. As Alien Goron was dragging Ultraseven, he shot the Emerium beam at Goron, freeing himself from the ape's grip. As Ultraseven and Alien Goron were both in a grip, arm to arm. Soon Ultraseven took advantage and tossed Goron. Ultraseven started throwing shuriken at him. Finally after Goron tried to surrender, Ultraseven shot the Emerium Beam, killing him.

In episode 7, Alien Goron, along with many different monsters are seen cheering on Ultraman Ginga as he fights Dark Galberos.

In episode 14, Alien Goron fought Peguila at a standstill until Redman showed up and interfered with the fight. He then decided to team up with the monster to fight the hero. In the end, Redman killed them both by slashing them with his Red Knifes.

Alien Goron reappeared in episode 17, where he fought Redman all alone, itching for some payback. However, Redman held the advantage throughout the entire fight and defeated the alien with his Red Fall. 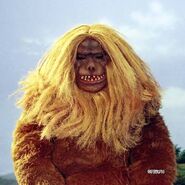 Figure of Alien Goron, by Marmit.

Goron vs. Ultraseven, with Woo watching 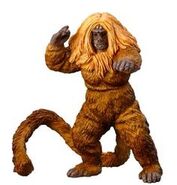 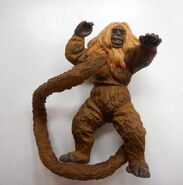 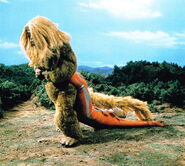 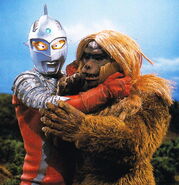 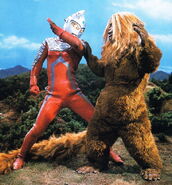 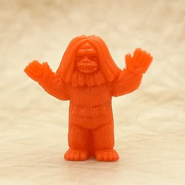