Alien Gorgon (ゴルゴン星人 Gorugon Seijin) is a alien that appeared in Ultraman 80.

Alien invaders from a far off world, they unleashed Saramandora on Japan before calling it back to begin their true plans of domination. Pretending to be humans, they tricked humanity into believing UGM were murderers when they made the captain shoot one of them while in human disguise. With their plan working, several of them then moved closer to the UGM base, protesting with humans and riling them up against the defense forces that protect them. Takeshi, however, managed to expose them for who they are by modifying his laser gun to reveal their true identities. Their cover blown, the invaders resorted to unleashing Saramandora yet again. In their rush, however, they decide to summon their monster in a warehouse, apparently crushing themselves by accident when Saramandora emerges from the building.

Their monster would soon be defeated and any subsequent Gorgon invaders are sent into full retreat by Ultraman 80.

Saramandora summon
Add a photo to this gallery 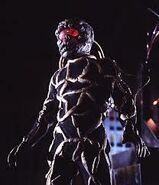 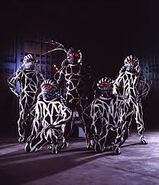 Add a photo to this gallery
Retrieved from "https://ultra.fandom.com/wiki/Alien_Gorgon?oldid=425994"
Community content is available under CC-BY-SA unless otherwise noted.