"Earthlings may be strong, but its just that their fear is stronger at times. This leads them to hurt others, so its important to not be afraid. To have courage (Yuki), like your name does. Your name might represent the hope that can unite different planets."

Long ago, the Alien Gold were known for being a peaceful alien race in the Universe. One day, Gargorgon appeared and attack their planet in hopes of stealing their planet's energy. While a huge war ensued against it, a royal prince named tE-rU (テル Teru) escaped from Planet with Rudian's Spark Doll (the Alien Gold's final line of defense against Gargorgon) under the wish of his ancestors and arrived on Earth but in the end, suffered amnesia.

Five years had passed as tE-rU tried to relocate his old ship but his current actions provoked multiple misunderstandings with the human beings, seeing them as hostile, forcing to reactivate Rudian and piloting it. But the injuries suffered caused him to faint and maked Rudian accidentally rampage in the city. X and Sky Musketty tried to stop it and but it ended when tE-rU managed to shut it down. Soon at the Xio medical base, tE-rU was given medical treatment and fully awakened. It was too late as he sensed the arrival of Gargorgon. After explaining to the Xio members of Gargorgon, together with Daichi, the two merge with their giant counterparts and prepared to face Gargorgon. The Man With the Memories of a Planet

But in the battle, X was petrified when protecting tE-rU and Rudian. Gargorgon demanded the Earthlings to surrender her tE-rU but Xio and UNVER disagreed, thus tE-rU offer them his help by becoming a bait. Gargorgon dominated over Rudian after firing their weapons at each other and was about to suck up all of the energy from Planet Gold before turning both Rudian and Alien Gold tE-rU to stone, but then Wataru, Hayato, and Asuna fired their Ultlasers at Gargorgon's hidden eye, injuring it and reverting all of Gargorgon's stone victims to revert back to normal.

After being turned back from stone, X fought Gargorgon once more and started the fight by gaining the upper hand in combat and getting her away from Rudian long enough for him to be turned back to normal. They fired energy blasts and minigun ammo at Gargorgon, but she brought up a dust cloud to cancel out the attacks and regenerated his injured eye. After X summoned his Bemstar Armor to redirect Gargorgon's Petrification Beam and fired it back her, turning her to stone, Rudian finished her off once and for all by firing his energy bullets at Gargorgon until she finally exploded, ended her threat on the universe once and for all.

Before leaving, tE-rU gave Yuuki, the schoolgirl from earlier his pendant and assures that she might someday representing the bonds between planets. An Oath Beyond Worlds

Healing Wave
Add a photo to this gallery 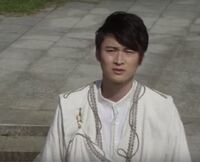 tE-rU piloting Rudian.
Add a photo to this gallery
Retrieved from "https://ultra.fandom.com/wiki/Alien_Gold?oldid=510015"
Community content is available under CC-BY-SA unless otherwise noted.