Ultra Galaxy Fight: The Absolute Conspiracy Chapter 2 "The Divergence"
Alien Godola (ゴドラ星人 Godora Seijin)[1] are a race of aliens that first appeared in Ultraseven. Since then, they tend to return in several medias related to the titular character of the aforementioned series.

Alien Godola's name is derived from the Gondolas of Venice. Due to this fact, many publications at the time referred to Godola as Alien Gondola (ゴンドラ星人 Gondola Seijin).

Although Alien Godola looks like a crustacean, they are actually based on a plant.

At least one Alien Godola took part in the Ultimate Wars as part of Alien Empera's army. He fought against Ultraman Belial on a small asteroid near the Land of Light, where the Ultra swiftly defeated him. Ultra Galaxy Fight: The Absolute Conspiracy

The Terrestrial Defense Force began detecting alien activity out at sea and requested the help of two UG members to help them. As they fell into the Alien Godola's trap and were sent into Earth's orbit, Dan was knocked out by one of Alien Godola's agents who he thought was a girl with car trouble and had his Ultra Eye taken like before. The Captain and two Ultra Guard members with a third shortly joining were introduced to the Alien Godola himself and his many agents. After disguising himself as an Ultra Guard member he went to Earth to plant a bomb in Ultra Guard's base and encapsulated Dan so he could further infiltrate the base as him. The Alien Godola then proceeded to insert a bomb inside the base that would blow it up. After one of the agents came back to taunt him, who happened to be the same one that knocked him out, he shot his gun onto a locket he was given that an alien Godola was taunting him with, using the sparks to destroy the capsule and allow him to gain his Ultra Eye back, turning into Ultraseven. After finishing the agent with the Emerium Beam, Ultraseven proceeded to defeat their leader who was disguised as Dan and even managed to damage his head with the Eye Slugger. Ultraseven chased him to a beach where Alien Godola revealed himself and went to full size. Alien Godola at first had the upper-hand, but Ultraseven soon knocked him off of his feet. Knowing he couldn't defeat the hero, Alien Godola tried to flee, but Ultraseven used the Emerium Beam to finish him. Ultraseven headed into space to the battleship with the bomb. The Godola leader was initially going to use it on the Ultra Guard's base, planting it on the battleship as Ultraseven engaged the remaining Godola agents guarding the ship. Ultraseven managed to defeat the agents with Ultra Chops, Ultra Kicks, Emerium Beams, and Shakehand Rays and saved the captain and Ultra Guard members as the bomb went off. Respond, Max

This alien reappeared in the Heisei Ultraseven series as a partner in crime with Alien Pegassa.

The Ultra Guard, sans Rumi and Satomi, had gone to their base to destroy it and gather the Omega Files, the most top secret information collected by mankind, said to even include some of the secrets of the universe. Their reason for this was because several Godola and Pegassa aliens had infiltrated the TDF meaning it was no longer safe. While they had planted the bombs Alien Godola had trapped them using a Neural Wave, placing each in a dream world that either a dream world or personal hell that used their most profound beliefs and personality traits against them. While they were saved by Kazamori, who was accompanied with Satomi, Captain Shiragane forcibly awoke himself from his paradise where his wife was still alive. Shiragane chased after the alien who had stolen the Omega Files and cornered him at a cliff behind the base. After a short standoff the two fired with the captain blasting a whole straight through the alien. The aliens body disappeared leaving behind the Omega Files' disk to be recovered.

It is likely that Godola returned to Earth in his original form after Ginga defeated Dark Lugiel.

The Alien Godola made their return in this series, after their last debut in 2002 (Ultraseven EVOLUTION). Aside from a nameless individual, another one is a defected AIB researcher Godo-Wynn (ゴドー＝ウィン Godō Win).

In hopes of restoring their planet's glory, two Godolas went undercover within the organization AIB and planned to exploit the powers of Little Stars. When Zena was lured away to the AIB headquarters, the nameless Godola held the former at gunpoint while Godo shot down Tri and attempted to take hostage of other Little Stars until Laiha usurp him. Enraged, he was forced to enlarged and terrorize the city until Geed appeared, followed by Belial's intervention in killing the alien with relative ease. Meanwhile, the nameless Godola was outsmarted and deported by Zena as punishment for his crimes.

This alien reappeared in Ultra Fight as a character that differs from many others due to his teleport ability.

He was seen once fighting Telesdon near a pool of acid. He also changed his name to only "Godola", with a subtitle of "Space Ninja", which coincidentally is the subtitle of one of his opponents: Alien Baltan.

Ace managed to kill both Bemstar and Eleking as well as defeat Godola, but was unable to stop the alien from killing Astromons, leaving the Ultra heartbroken.Ultra Heartbreaking Story Don't Cry, Ace

A second Alien Godola and Bemstar later face Taro in battle, but both are defeated.Taro Monster Extermination Go!!

Alien Godola was released four times in the Ultra Monster Series. All of the figures have three points of articulation like most aliens in the line. For coloring, most have silver hands like in the Ultra Fight version and one has black hands like the Ultraseven version, most are also faded in color and are 6in tall.

Alien Godola was released as one of the Ultra Monster 500 series as a Spark Doll. He has two points of articulation and has darker colors but, makes the white ridges more black than white. He also has white hands and stands at 5in tall. The figure is compatible with the DX Ginga Spark. 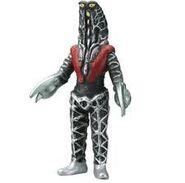 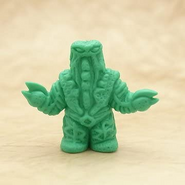 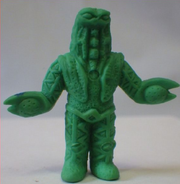