None
Alien Godley (ゴドレイ星人 Godorei Seijin) was a villainous alien that appeared in Ultraman Max.

Sometime ago, Godley mercilessly annihilated the Planet Neril population by destroying the whole planet. It fled to Earth sometime later and terrorize a city. Kaito transform into Ultraman Max and fight the giant alien but no match due to it's regeneration ability and started to torture Max with multiple energy blast. As it about to fire the stronger one, it hit Keef instead, the last of the Alien Neril race as it sacrificed himself to protect Max. The Ultra later regained his strength and avenged the poor alien's death by summoning the Max Galaxy and unleash the Galaxy Cannon on the villain. 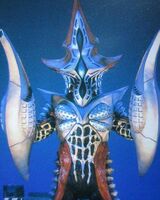 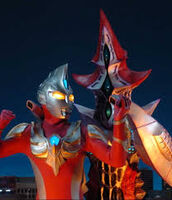 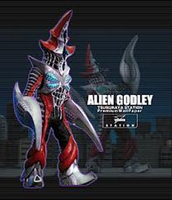 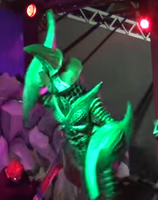 Alien Godley in a Stage Show
Community content is available under CC-BY-SA unless otherwise noted.