"If you do not comply with our demands, unfortunately we will resort to full assaults on your major cities,and execute our plan to annihilate all three billion people on Earth."

Alien Ghos (ゴース星人 Gōsu Seijin), also known as Alien Ghose[1] or Alien Goth, are aliens from the planet Ghos that appeared in episodes 48 and 49 of Ultraseven. Originally, a group of Alien Ghos was sent to Earth to conquering it or destroy humanity.

The UG noticed the Ghos ship as it entered Earth atmosphere and sent Dan Moroboshi in the Ultra Hawk to stop their saucer, but because of a strange fatigue Dan could not so much as hit him and was fired at. After Dan's fighter crashed on Earth, Alien Ghos was in a dog fight with the Self Defense Force until his saucer was hit and crash landed. Afterwards Dan noticed that his abilities have become far weaker than they normally were. That night, Dan was met by his commander saying that the reason he was tired was because his energy was critically low after staying on Earth for so long and he needed to return back to M78. Dan refused to return because the people of Earth needed him to fight off the many dangers that attacked it, but his commander only became angry and disappeared. That same night, the Alien Ghos returned for revenge for their fallen comrade. That morning, the Ultra Guard opened fire on Alien Ghos's carrier craft, but nothing seemed to phase it. Once it landed, the UG went on foot to try and surround the craft. After one of the Alien Ghos managed to use a capture bubble on Amagi, member of the Ultra Garrison, the rest of the squad fired their weapons at the craft until it opened to reveal Pandon.

Once mobilized, Pandon used his flames to scorch the entire battlefield. Just as Pandon was about to drop a rock on the Ultra Garrison, Dan made the fateful choice of turning into Ultraseven even though he knew it could kill him like his commander said if he fought again. Even though Ultraseven managed to save the Ultra Garrison, Pandon was too much for him as he could not use the Emerium Ray or Eye Slugger on him. Anne managed to distract Pandon long enough for Ultraseven to use the Eye Slugger to cut off Pandon's left arm and right leg, although the Alien Ghos would bring him back very shortly after. At the same time, Dan was found badly injured and was rushed into medical care at the Ultra Garrison's base where his condition became critical.

As Dan was being cared for, the Ultra Guard went looking for Pandon's remains, but found only his left arm and right leg that were severed. Suddenly, Alien Ghos sent a saucer to attack the Ultra Garrison's base. During the chaos Dan disappeared without a trace. After the attack on the base Alien Ghos's saucer was sent to an underground base where Pandon was being reconstructed and had brought Amagi as a hostage. As they were confining him to a large capsule Dan took one of the Ultra Garrison's cars and went to the base himself. Shortly after Alien Ghos used Amagi to broadcast a message around the world demanding Earthlings to surrender and they will place them on their underground city on Mars at the same time guaranteeing their safety in exchange of Earth. Yet if they refused, they would launch a full assault on the world's important cities and annihilate all total 3 billion people on Earth.

Alien Ghos was an individual from Planet Ghos, raising his Pandon from a chick with a lot of love and care. At some point, the two migrated to Earth to live a peaceful life. Ghos joined a collective of aliens seeking to overthrow humanity, though he grew to like the planet and eventually fell through with his plans. He was told that they would use Zetton as a scare tactic, but it ended up destroying the city.

The Ghos became a street cart vendor and sold food to people in the park, but unbeknownst to him, EGIS rookie Osamu Tasaki and Kirisaki preyed upon him. His true identity was revealed when the rookie used a stolen CQ device, exposing his alien form. The two proceeded to chase him down into the nearby forest. The Ghos was tackled to the ground and attacked by Osamu, accusing him of a crime he did not commit. Homare and Hiroyuki arrived to break up the chaos with the former being knocked out cold.

The Ghos's Pandon emerged from a hill, intending to come to his master's rescue. Suddenly Homare began to speak, the Ghos using him as an outlet of communication to reason with Osamu and try to spare him death by the monster's rampage. While Hiroyuki transformed into Ultraman Taiga to ward off Pandon's fury, the Ghos continued to talk with Osamu and find within his hunger for revenge, saying that he'd even leave the planet with his pet. Most of it was deflected, but eventually broke through and got him to release so he could calm Pandon. He spoke to the monster and it finally became docile; however, there'd be no happy ending. Kirisaki transformed into Ultraman Tregear, and proceeded to slice Pandon into many pieces before exploding. The Ghos collapsed to his knees in shock and sadness at the death of his companion.

Later after Tregear and Taiga had their battle, the alien set up a small grave to mark Pandon's death site. He gave a farewell to EGIS and Osamu before leaving the Earth at sundown, all of them watching his ship. Friend in Earth

Drill Bomb
Add a photo to this gallery 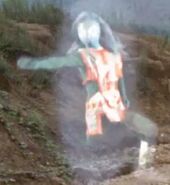 The Alien Ghos' underground base destroyed

Retrieved from "https://ultra.fandom.com/wiki/Alien_Ghos?oldid=495236"
Community content is available under CC-BY-SA unless otherwise noted.